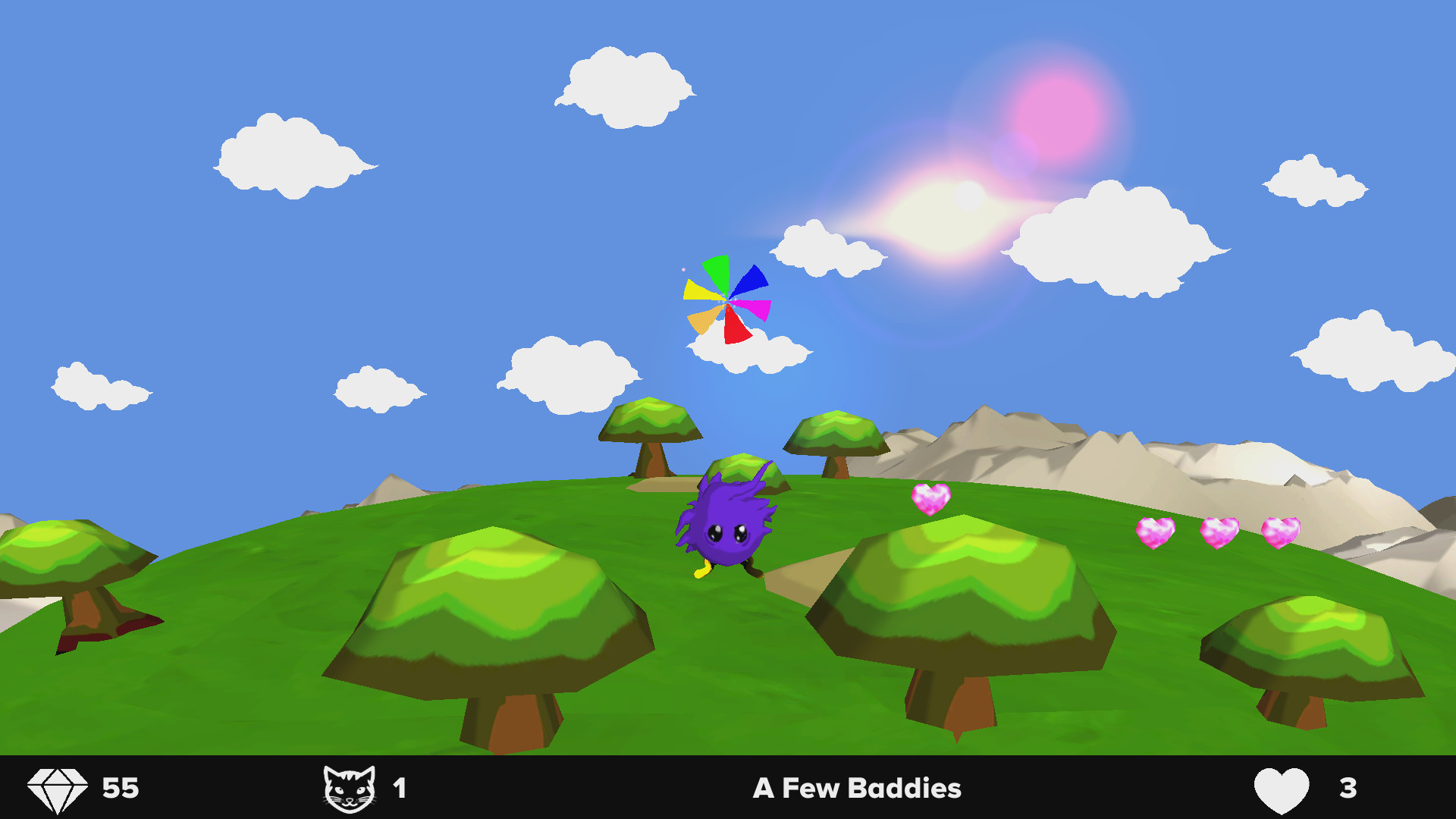 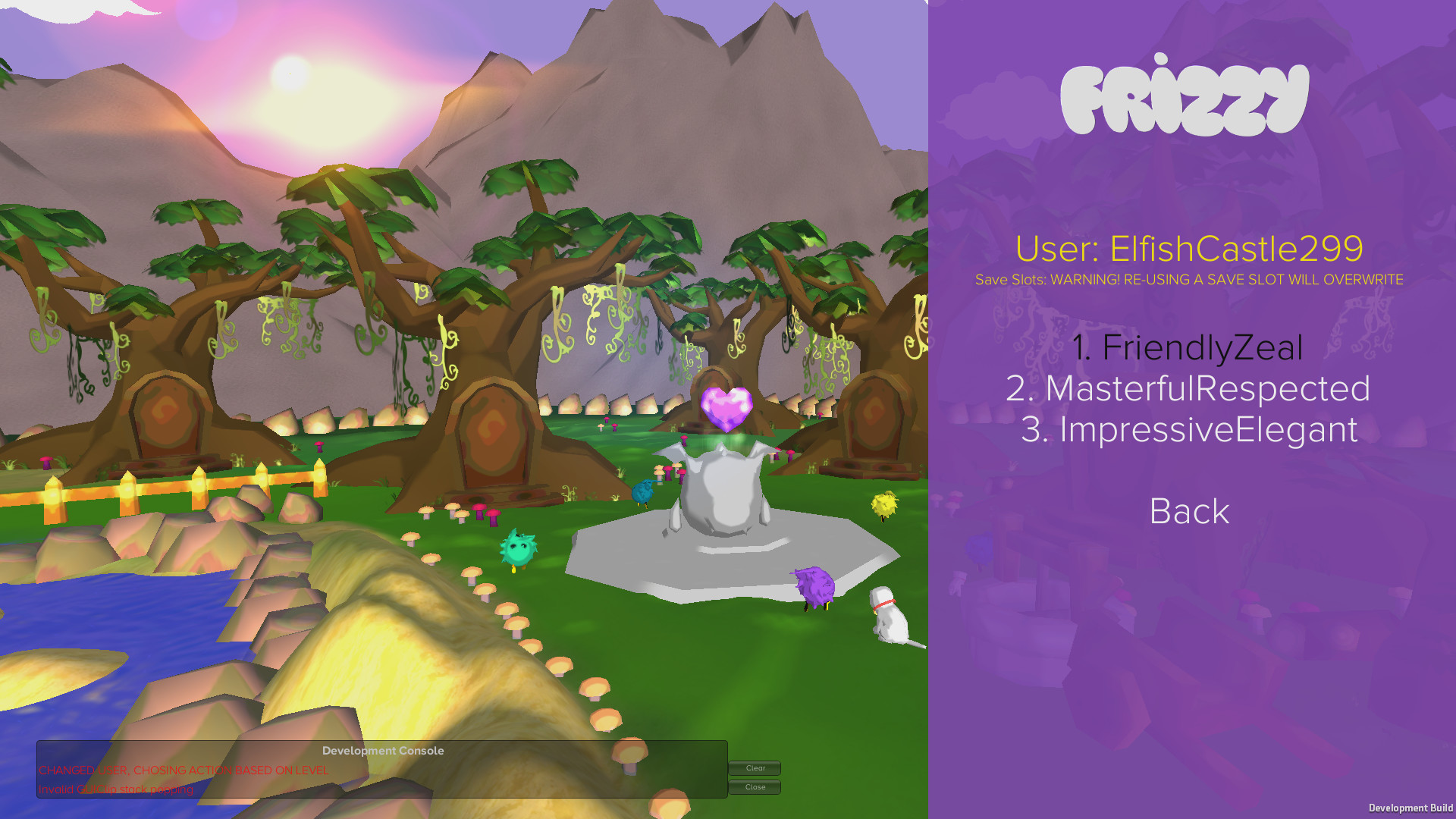 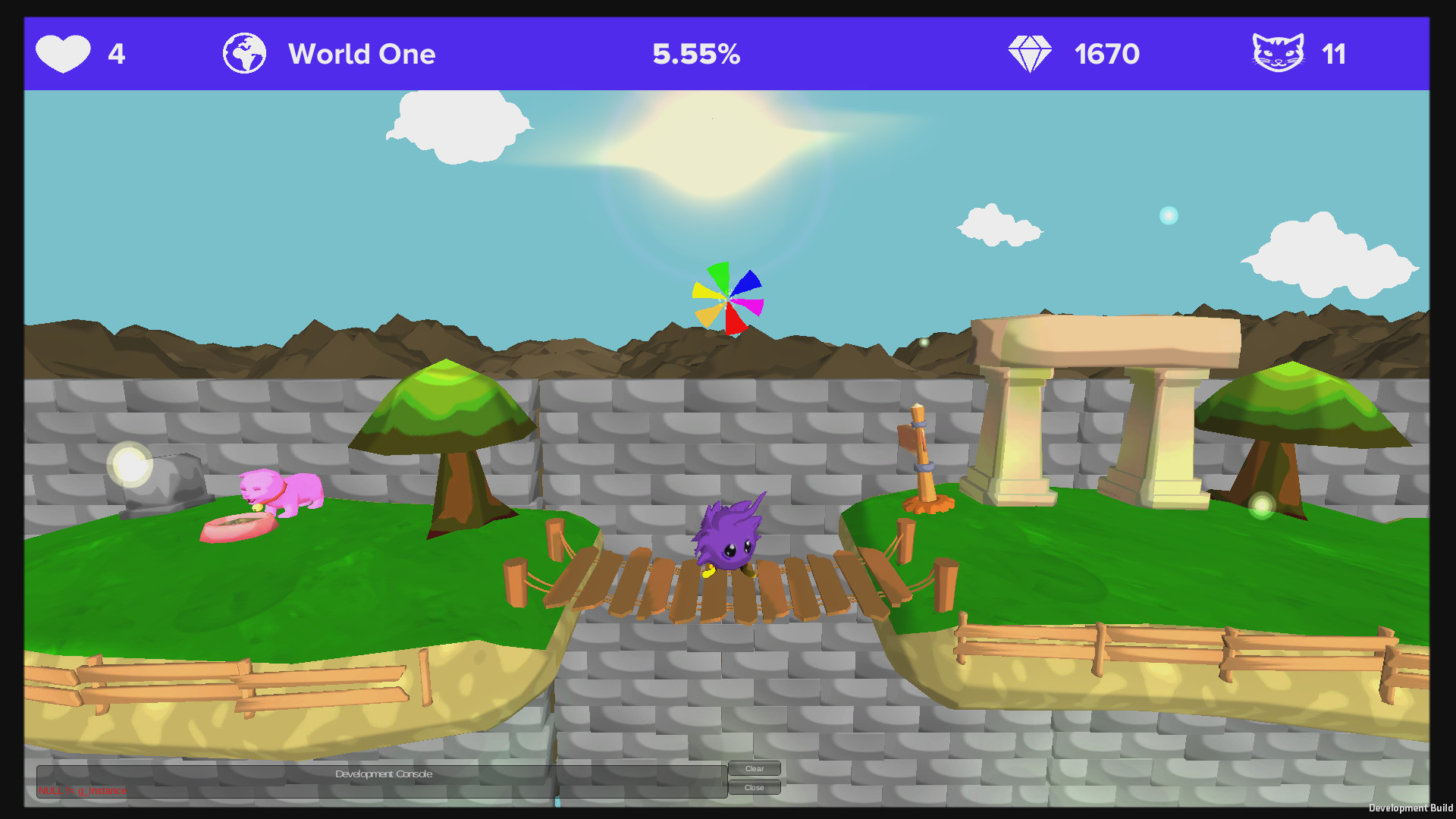 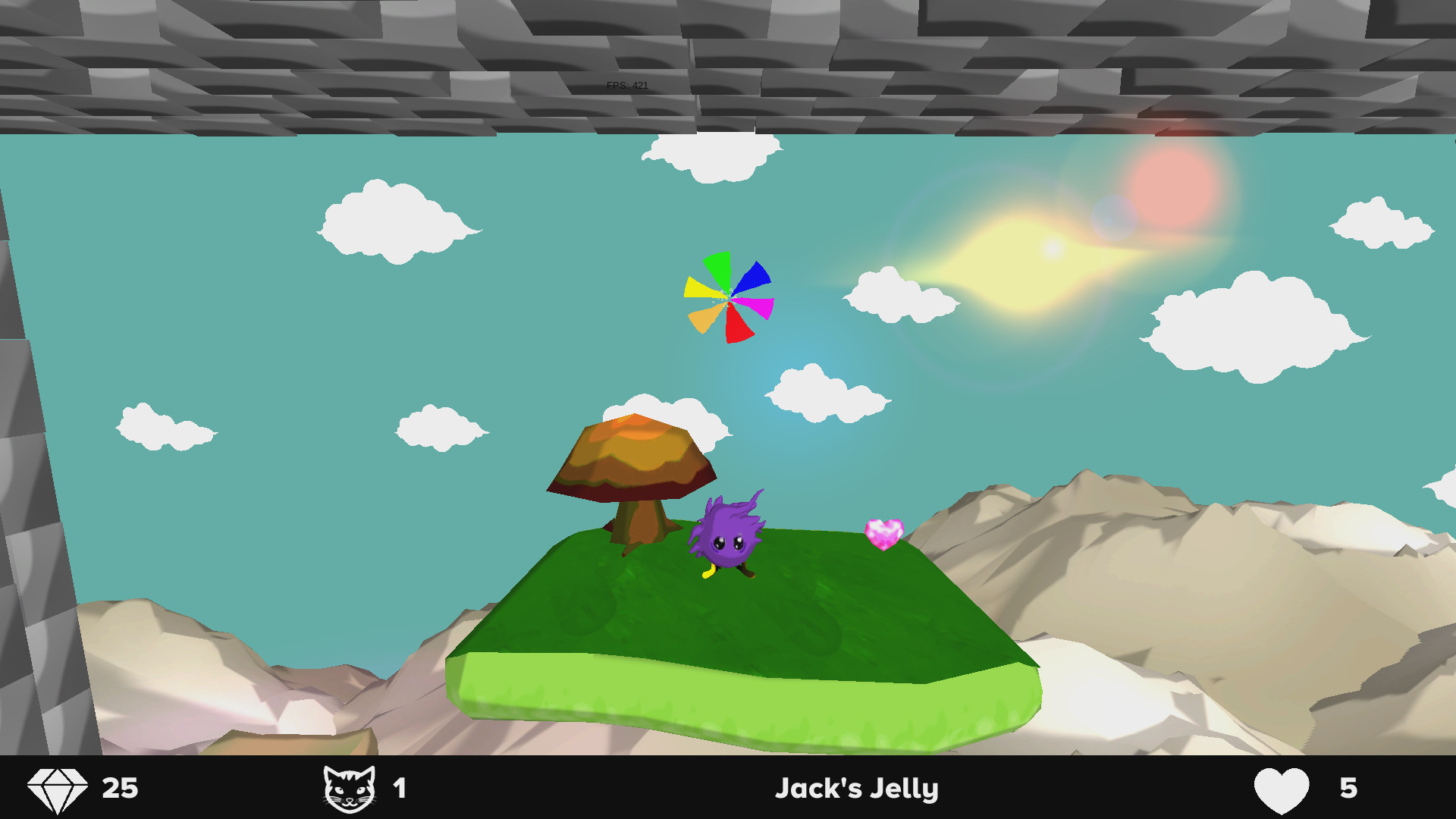 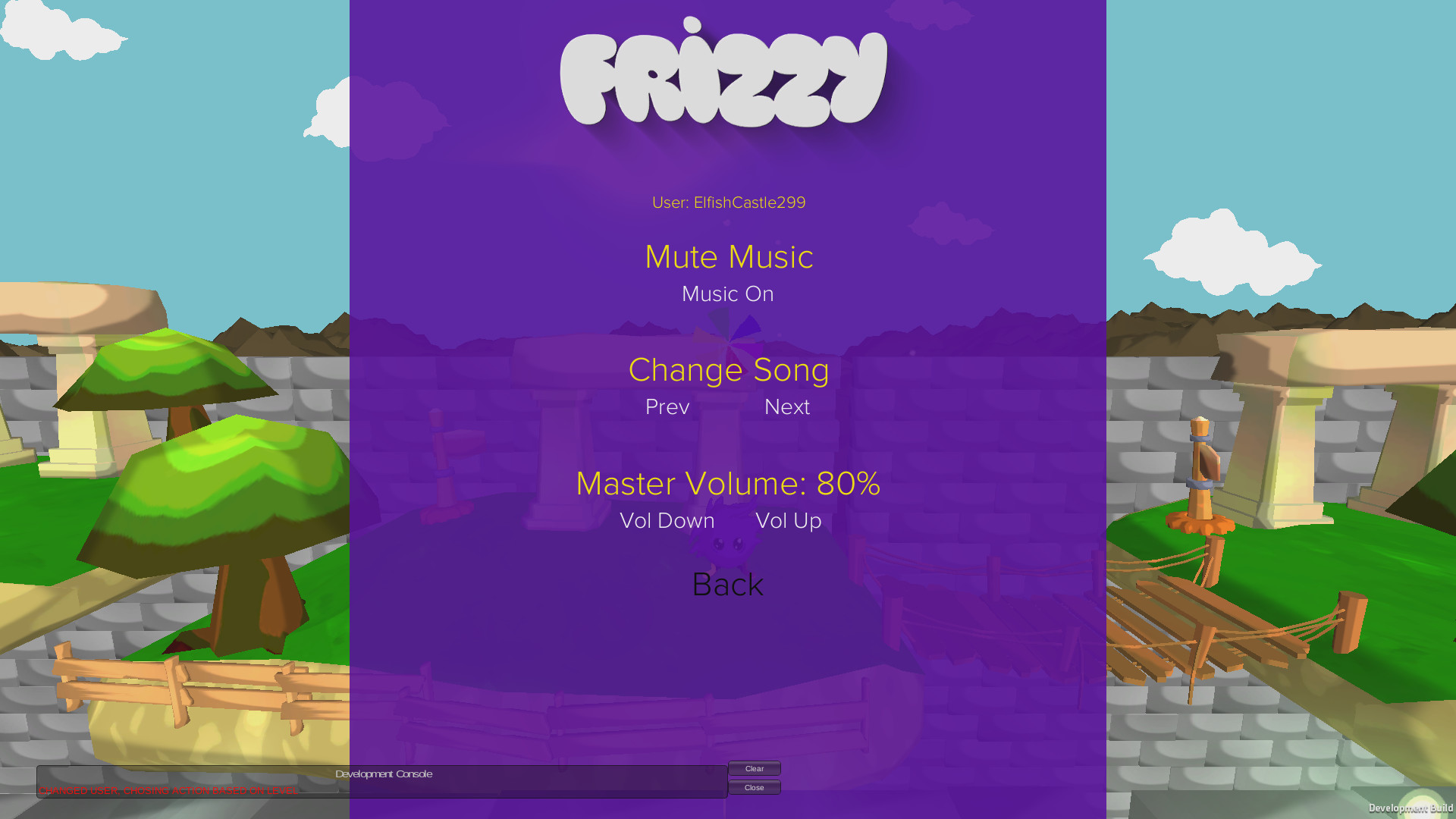 Frizzy, a game by Team Frizz.Frizzy is a platformer filled with awesome action. The main plot is that you are a frizzy ball of fur who can latch onto static balls launch himself around the levels.

GameplayThe most important thing about Frizzy’s gameplay, to us, is the way the controls feel. We believe that in a platformer the controls must be absolutely perfect.

Somewhere on Fuzz Island…Frizzy was minding his own business. He worked in the fuzzball factory on Fuzz Island. One day he noticed something in the clouds, something he had never seen before. It was a ball of static energy, and he could tell from it’s magnificence that only he could see it.

Forlorn, he thought of how he would never reach those clouds. They’re so high! And he is so small..

For years Frizzy’s Village on Fuzz Island had been tortured by an Evil Dragon. His name was Doof, and once a year he would come to the island and attempt to blow all the pretty Fuzzballs away. This day was known as the Great Green Sneeze on Fuzz Island, and every year all the fuzzy families would hide out and latch on for safety, or be gusted into eternity.

But one year something glorious happened. Frizzy was dutifully working in the fuzz factory when he saw a bunny playing outside his window.

So he followed it. But he had forgotten that today was the day of the great sneeze! By the time he had remembered, it was too late. He saw the green fog coming in and was swept away.

The Great Green Sneeze came and with its mighty wind Frizzy was blown high into the air. From up in the air he could see further and clearer than any Fuzzball before him could. Then he remembered!

I must fuzzyfloat my way towards the ball of static energy!

Like any other ball of dirt and hair, Frizzy is fully in control of how he maneuvers through the air. He floated and spun and twisted and paddled. Through the air he went, and he floated his way towards the ball. Finally he reached it, and he found something amazing!

Frizzy could magically attach to the ball!

He looked down and gazed upon Fuzzy Island. He wondered if any of the other fuzzballs had forgotten to hide indoors during the Great Green Sneeze. For a moment he pictured his fuzzy family, and his little brother Lint.

The moment was interrupted by the foulest of laughter.

Who… who are you?? Frizzy whimpered.

Frizzy felt the second sneeze only for an instant, and blacked out. It blew him further from his family than he could ever possibly have imagined. He woke up on a platform covered in grass.

This is the furthest from home I’ve ever been. Frizzy said.