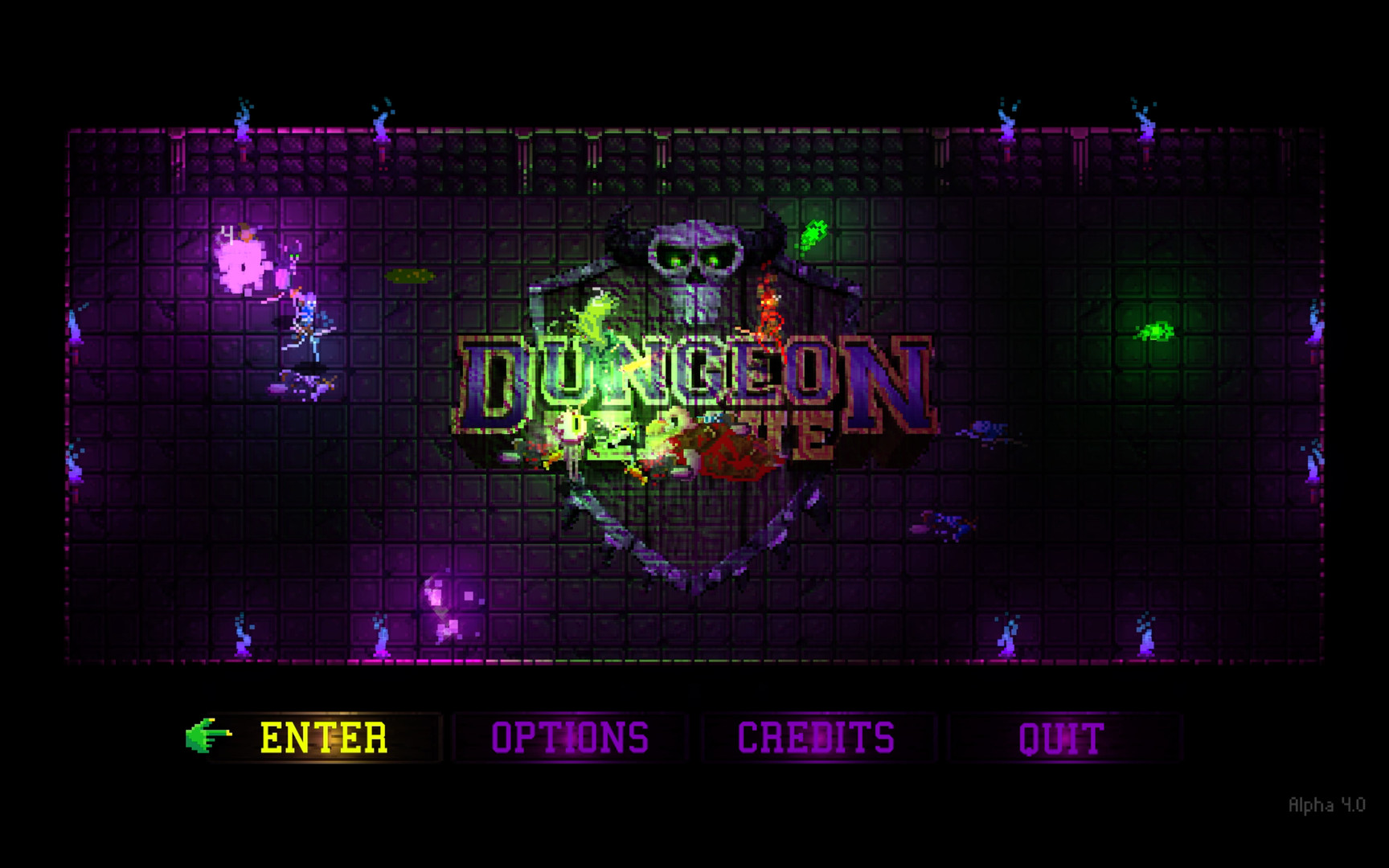 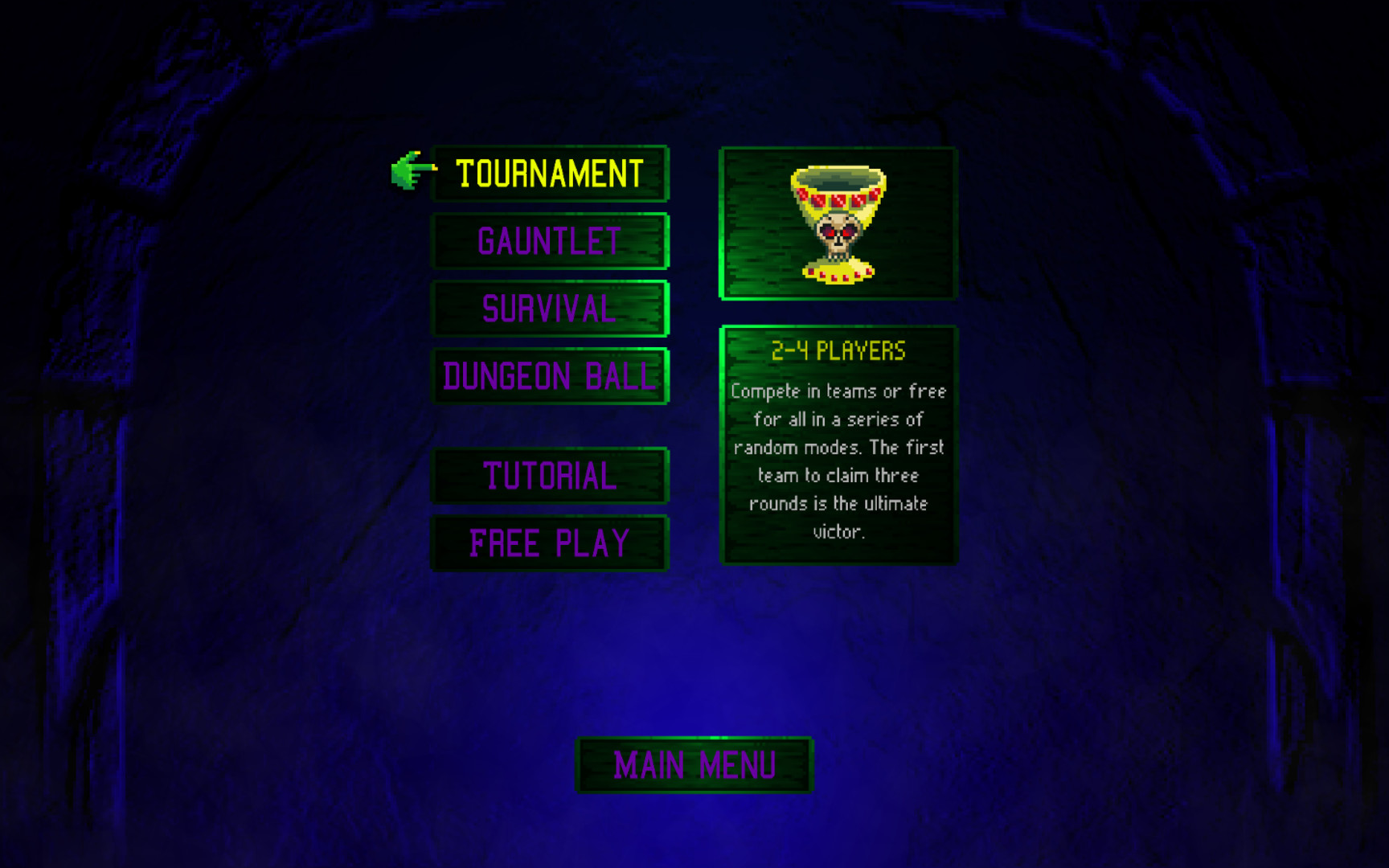 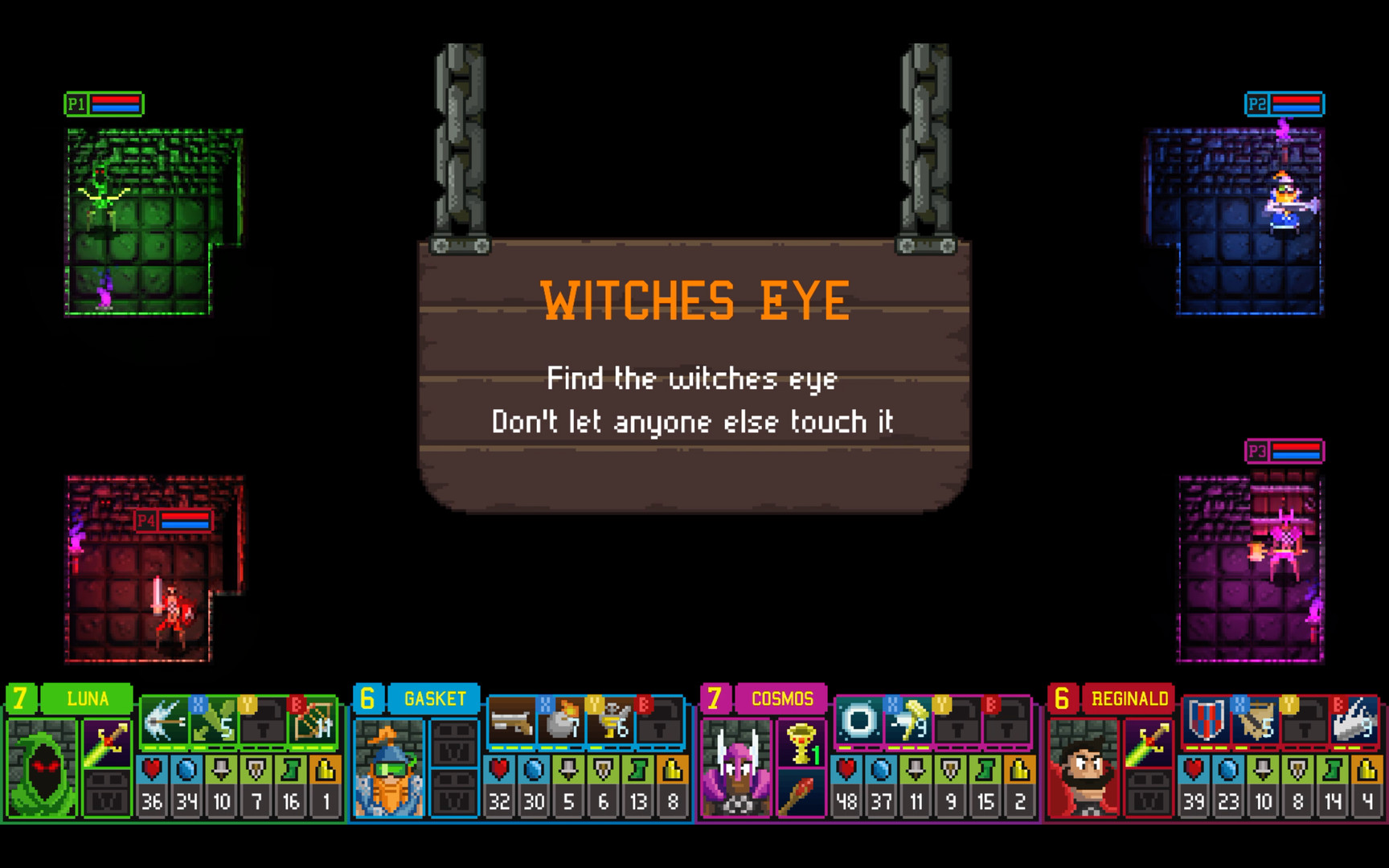 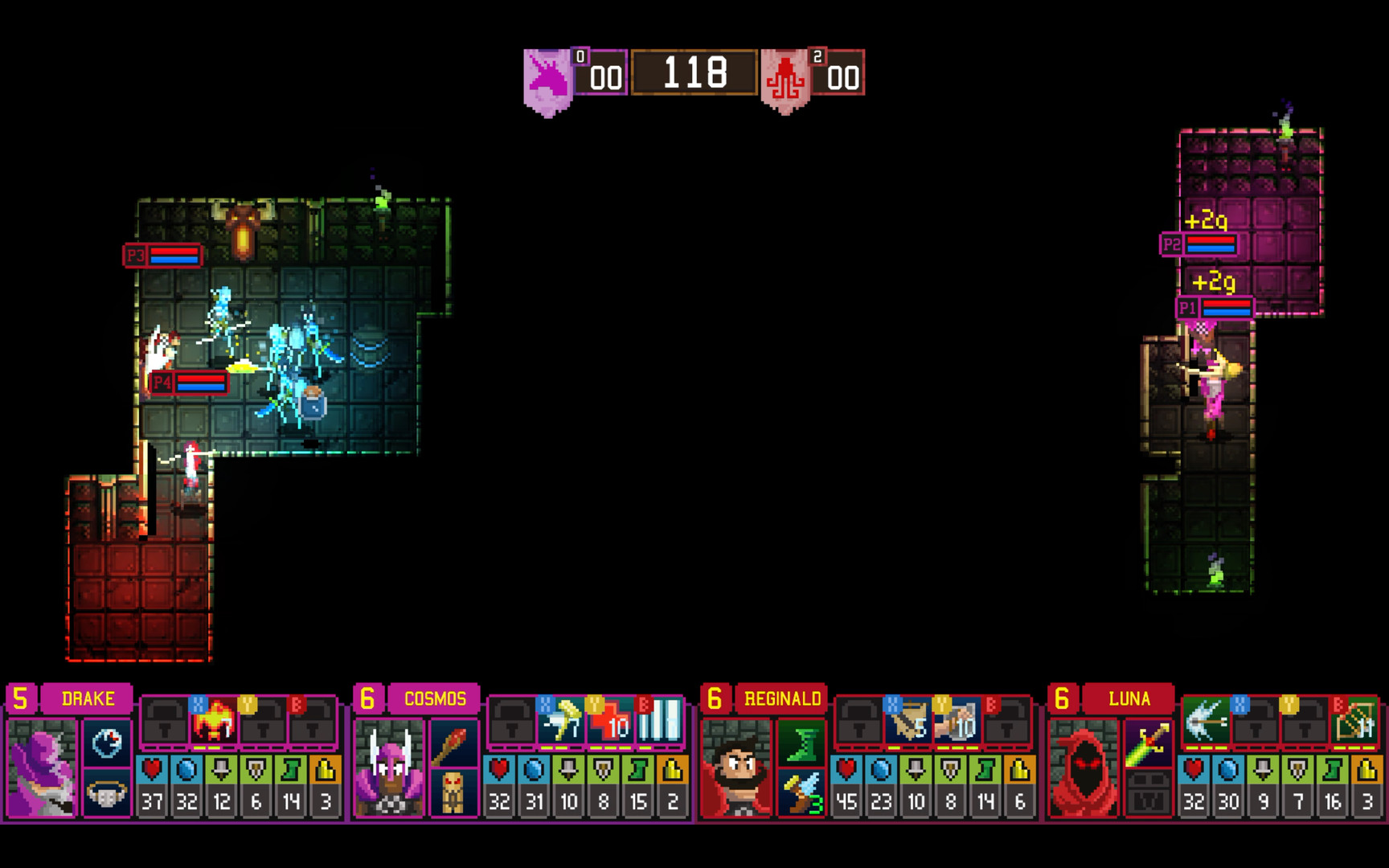 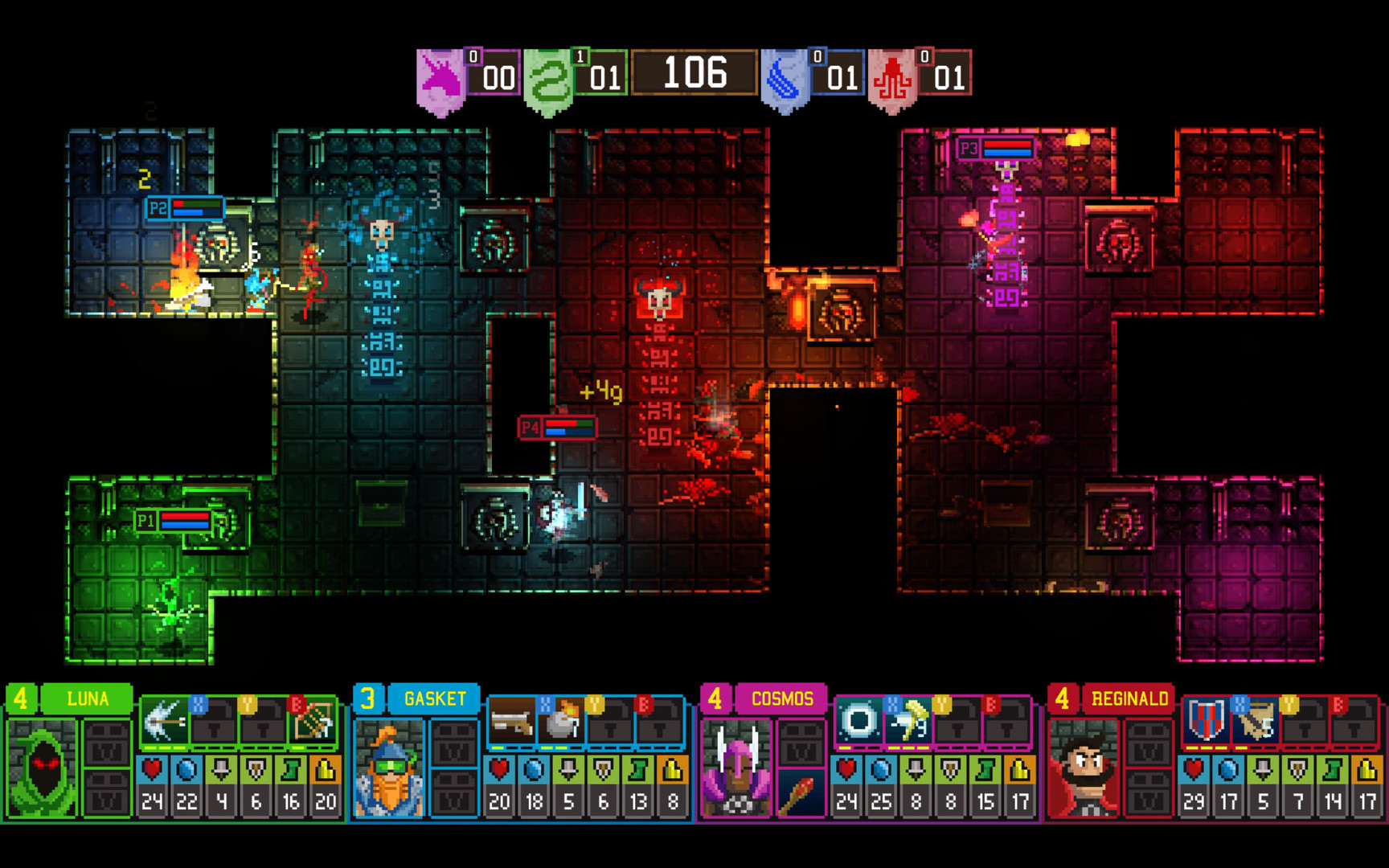 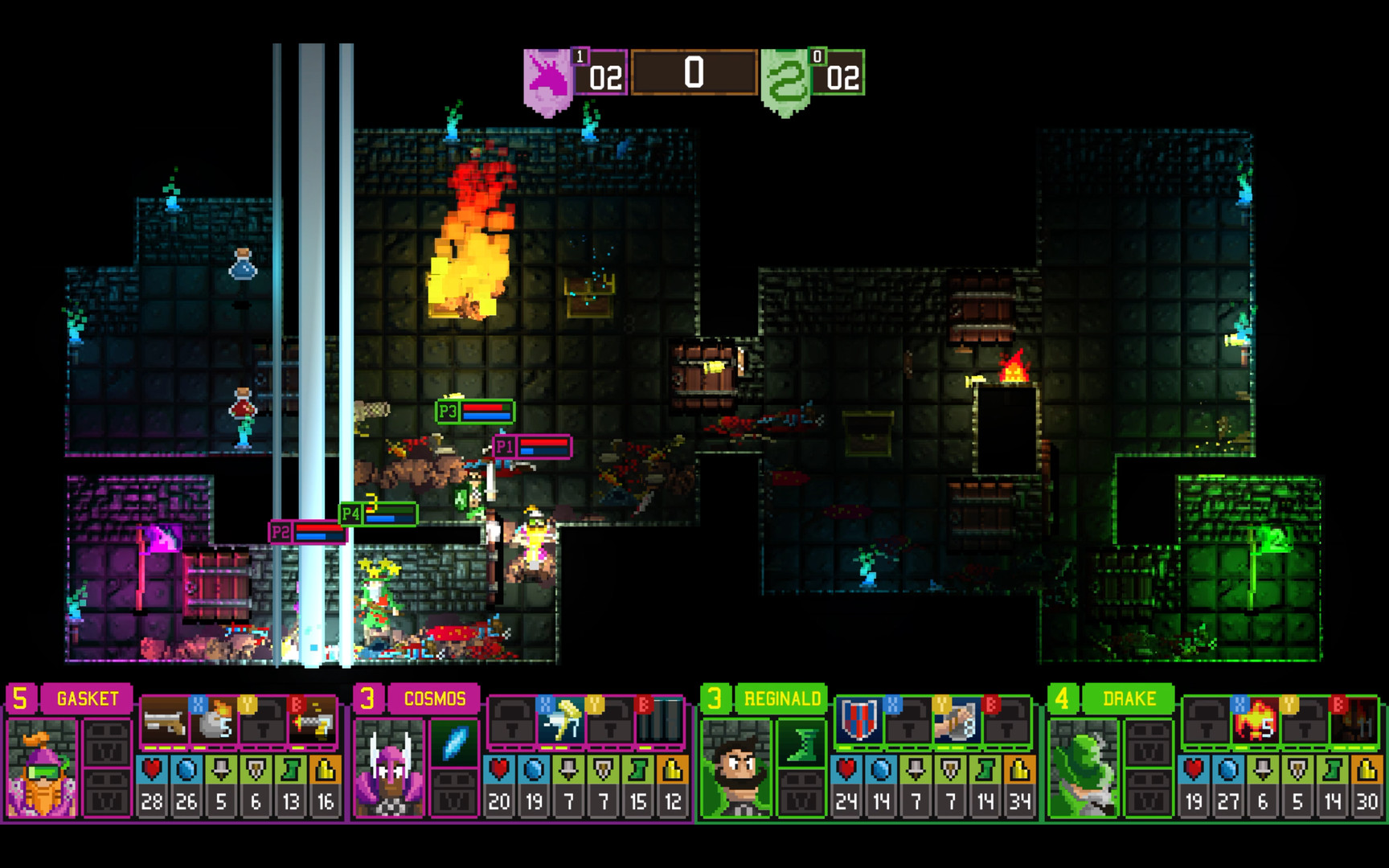 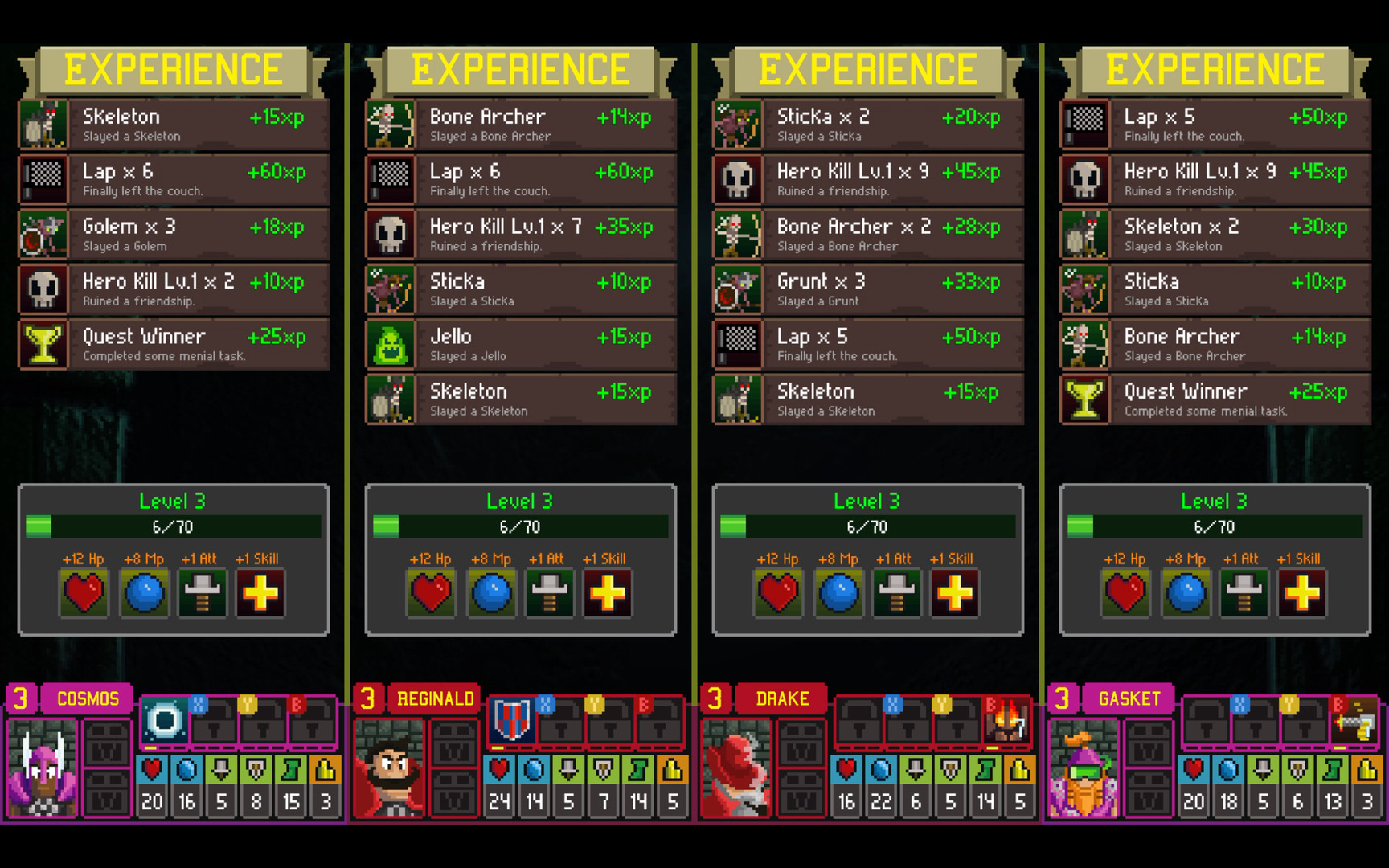 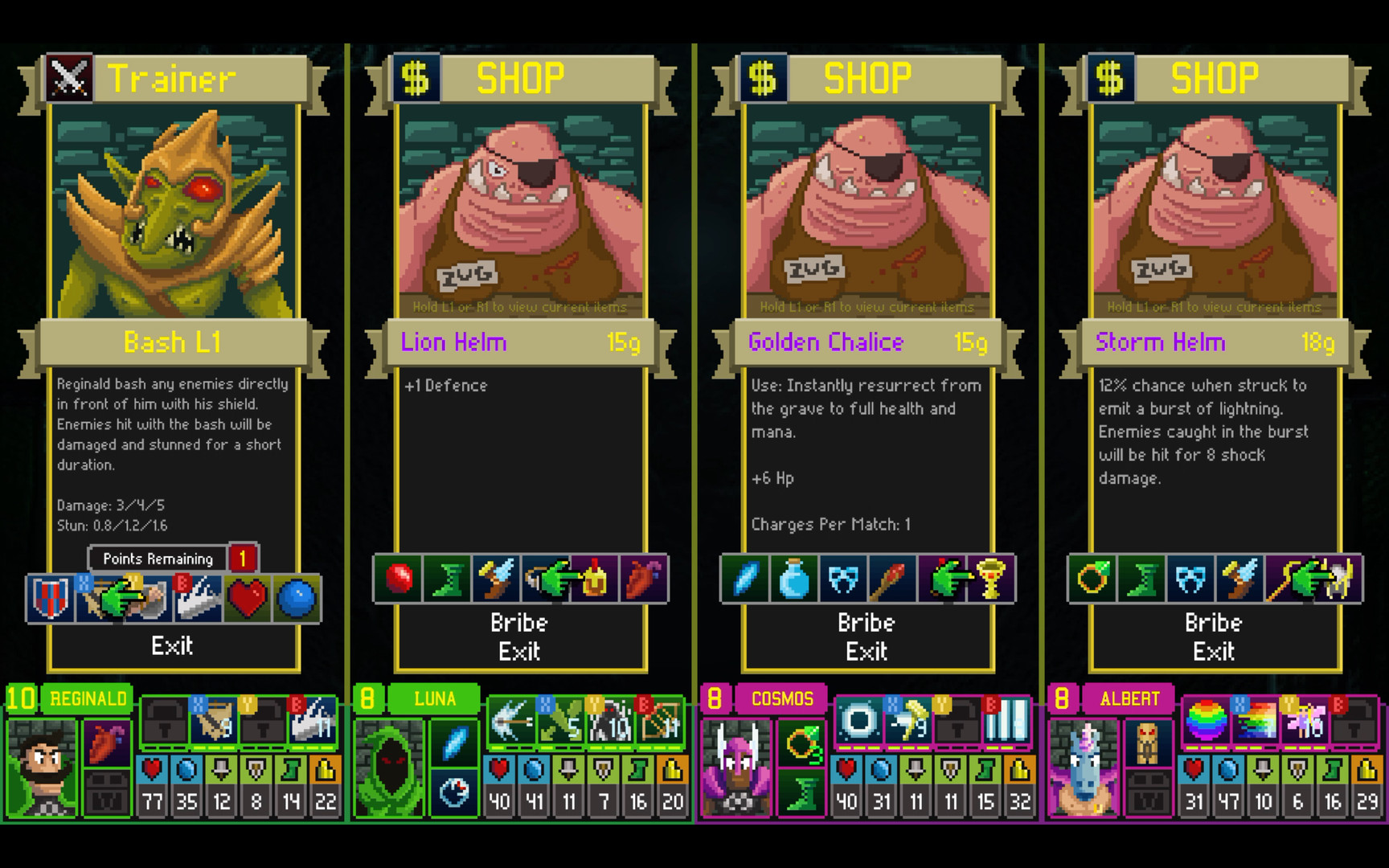 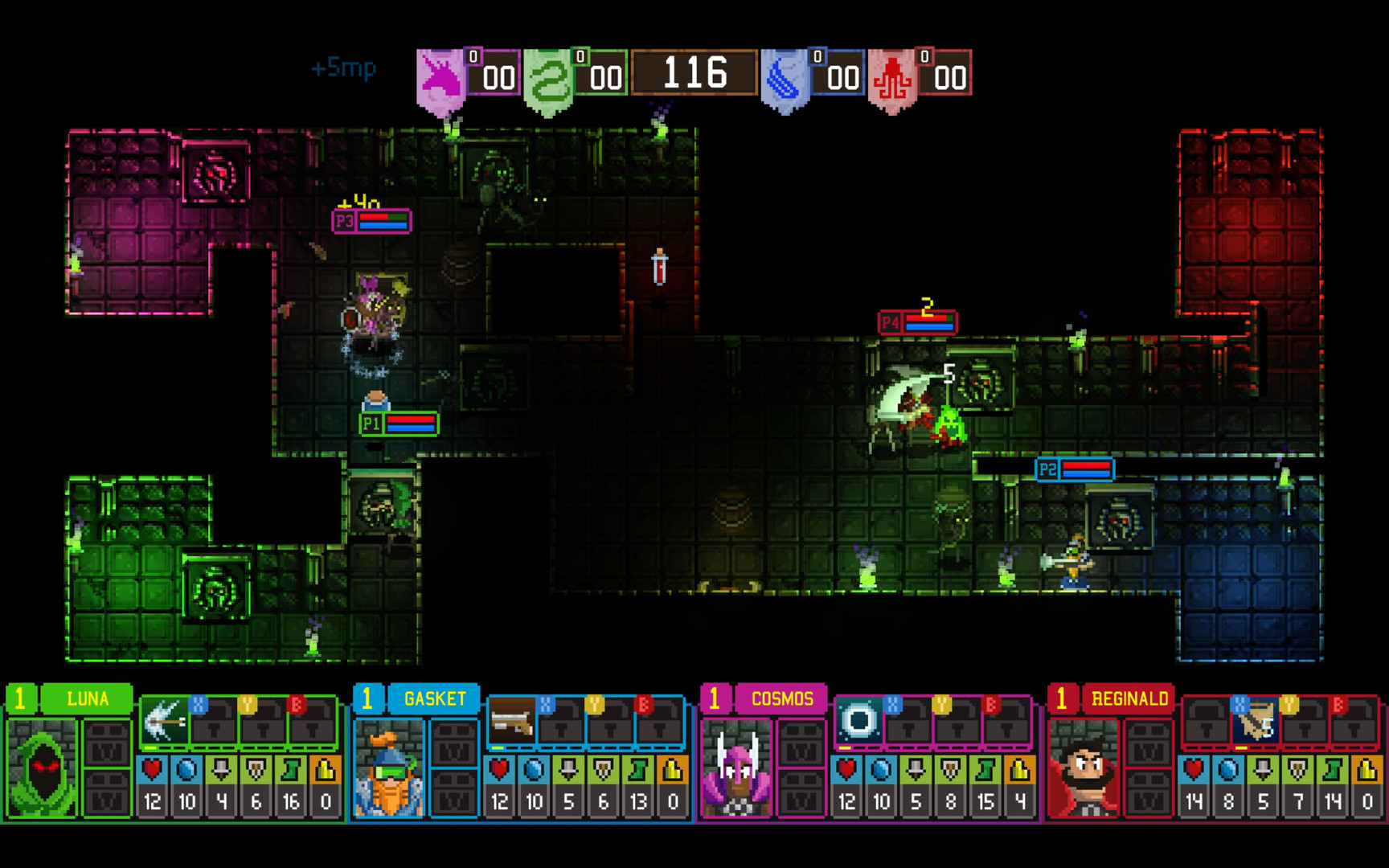 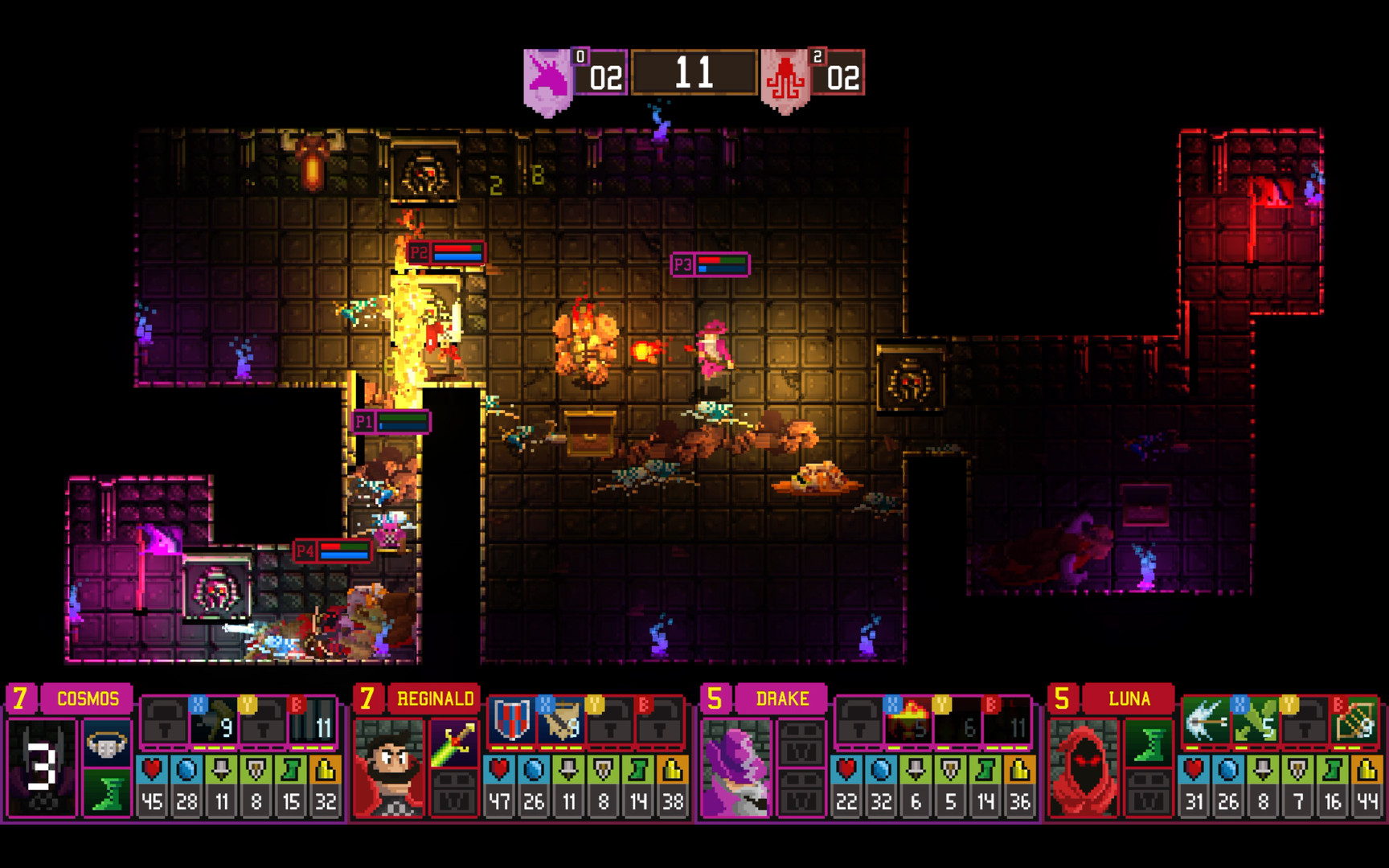 The Dungeon Masters have grown incredibly bored counting the days until some tasty new morsels enter their dungeon. The answer? Invite them in and make a show of it! Enter, the Dungeon League.

The Dungeon Masters have a new favourite sport, Dungeon League takes everything that is awesome about dungeon crawling and spews it out as 10 minutes of chaotic, multiplayer, party-game action. Up to four All Stars take to the procedurally generated dungeon to battle each other (and hordes of enemies) in a series of two minute rounds pulled at random from a stack of wildly different Quests. From the classic Deathmatch to the ever frantic (and kind of gross) Witches Eye, each round is hard fought and requires unique tactics to succeed.

Teaming up or standing only for themselves, each of the classic RPG heroes will rapidly level up and equip new gear between rounds, going from zero to hero in minutes not hours.

Intense Dungeon Crawling Action - Rounds last just two minutes and feature hordes of enemies to kill, objectives to achieve, traps to avoid and opponents to be vanquished. Win three rounds to be hailed as the Dungeon League Champion.

Easy to pick up, hard to put down - Dungeon League takes everything awesome about RPGs and removes the boring bits. It’s simple to learn, anyone can play and there’s always time for one more go.

All the RPG tropes got invited: Heroes, warriors, rogues, trolls, wizards, dungeons, traps, flickering torches, goblins, loot, skills, stat points, sweet epic gear sold by a mysterious and seductive merchant of indeterminate species and an anthropomorphised unicorn - they all came to the party.

More modes than your Dad’s old dungeon crawler: Every Tournament match randomly pulls from a stack of different Quests. From Deathmatch to Capture the Flag to Witches Eye and Obelisk, your Dad has never played a game like this. Take time out from the competition in the co-operative Gauntlet and Survival game modes.

Level at light speed: These All Stars take three or four levels at a time, man. Rapidly train your hero through their skill path between rounds before visiting Zug the Shopkeeper to purchase the Winged Boots, Vampiric Ring or Shadow Amulet. Find the perfect build to give you the edge in the next bout.

Take your All Star out for a test run: Worried about looking like a sunday crawler or not sure what All Star to choose? Jump into the freeplay area to bash some monsters and learn how to master each character.