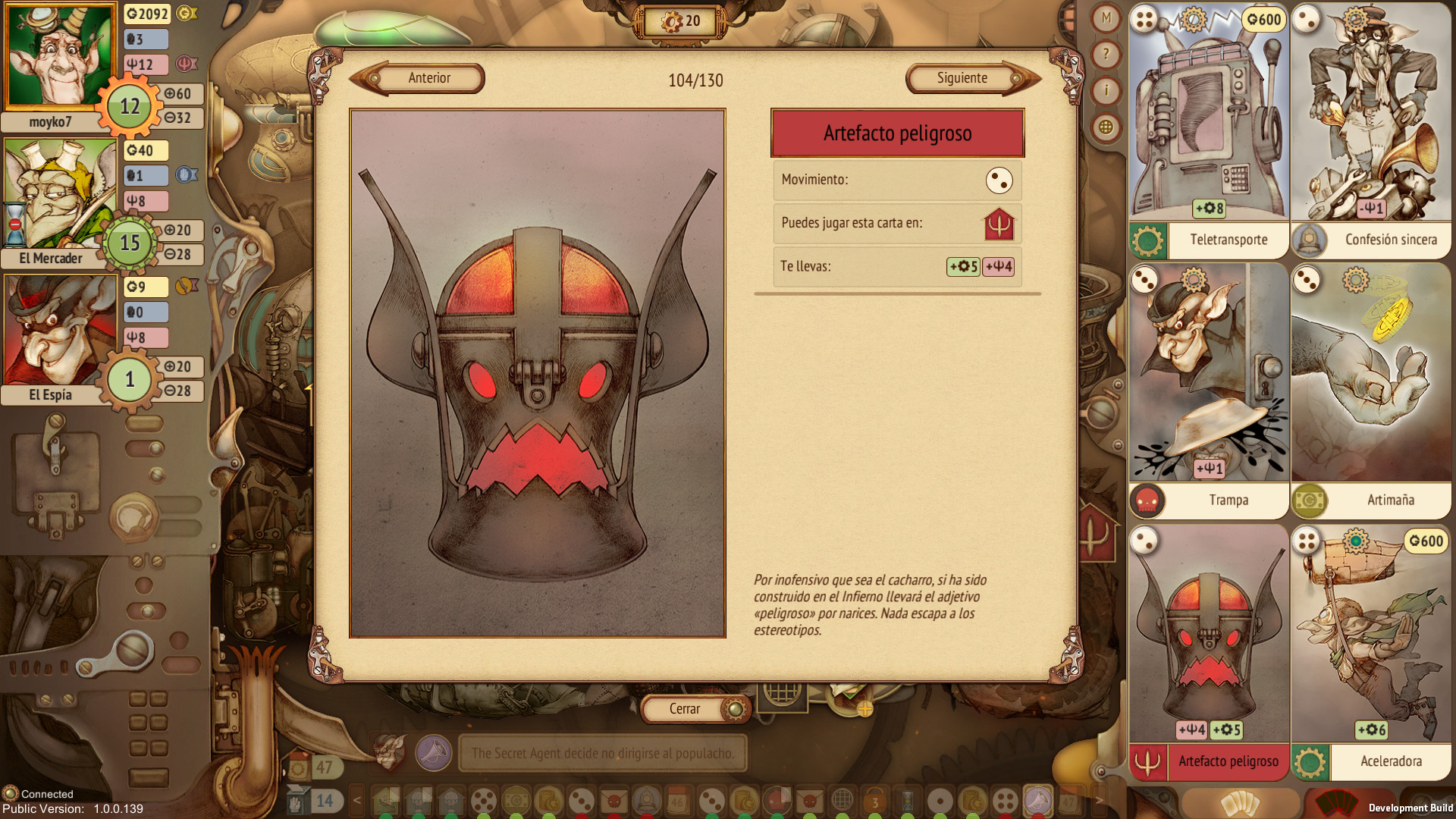 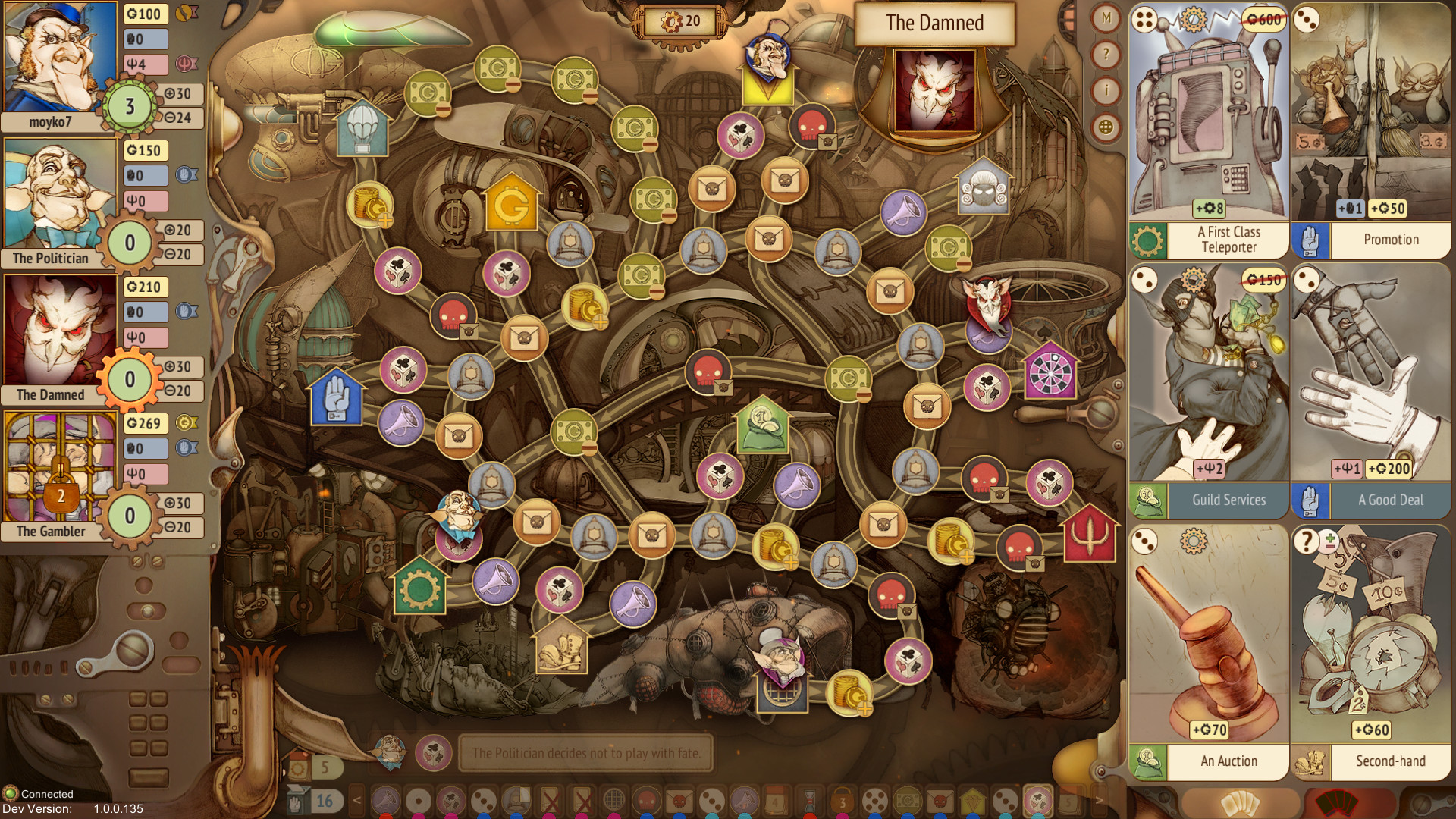 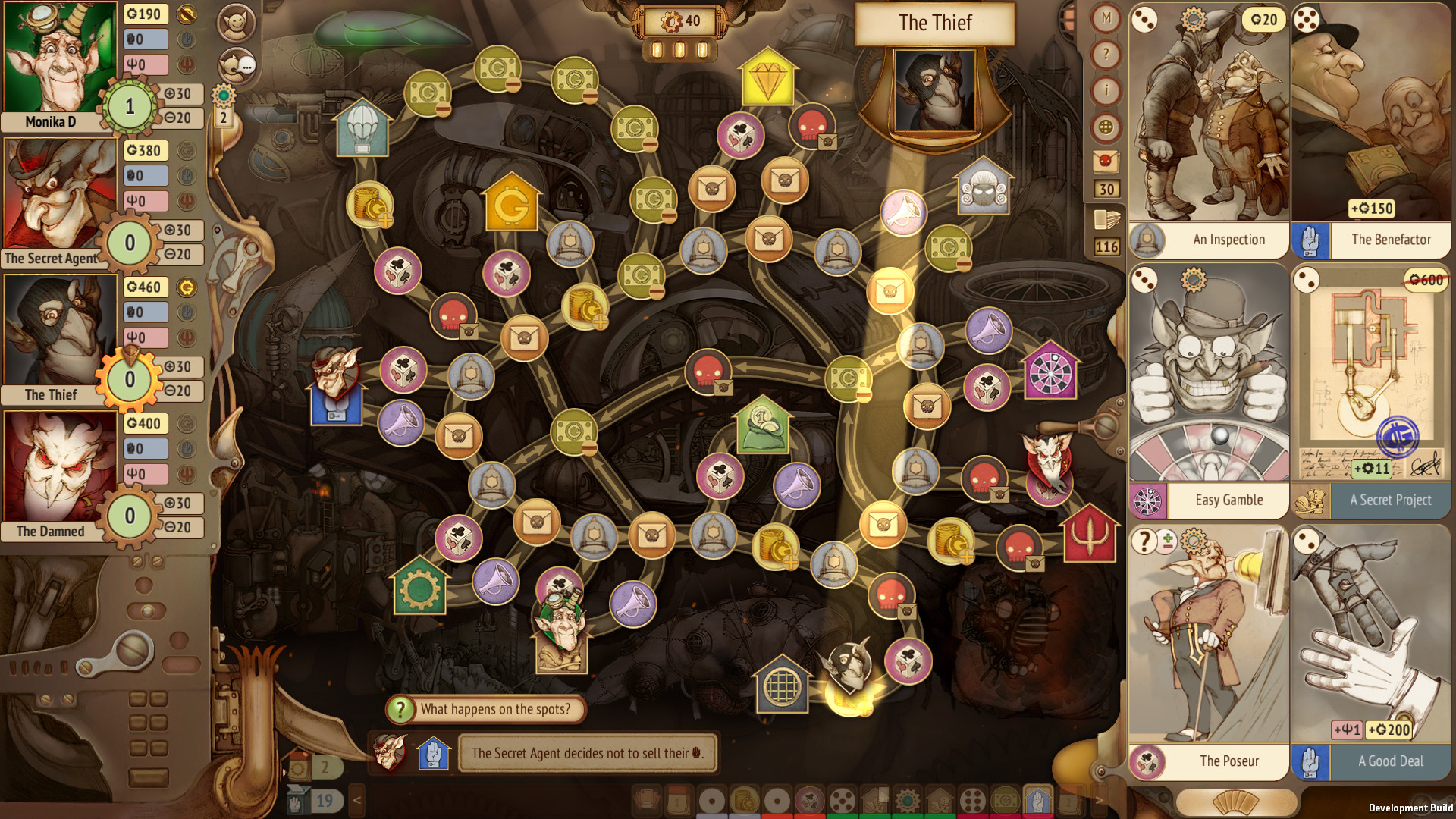 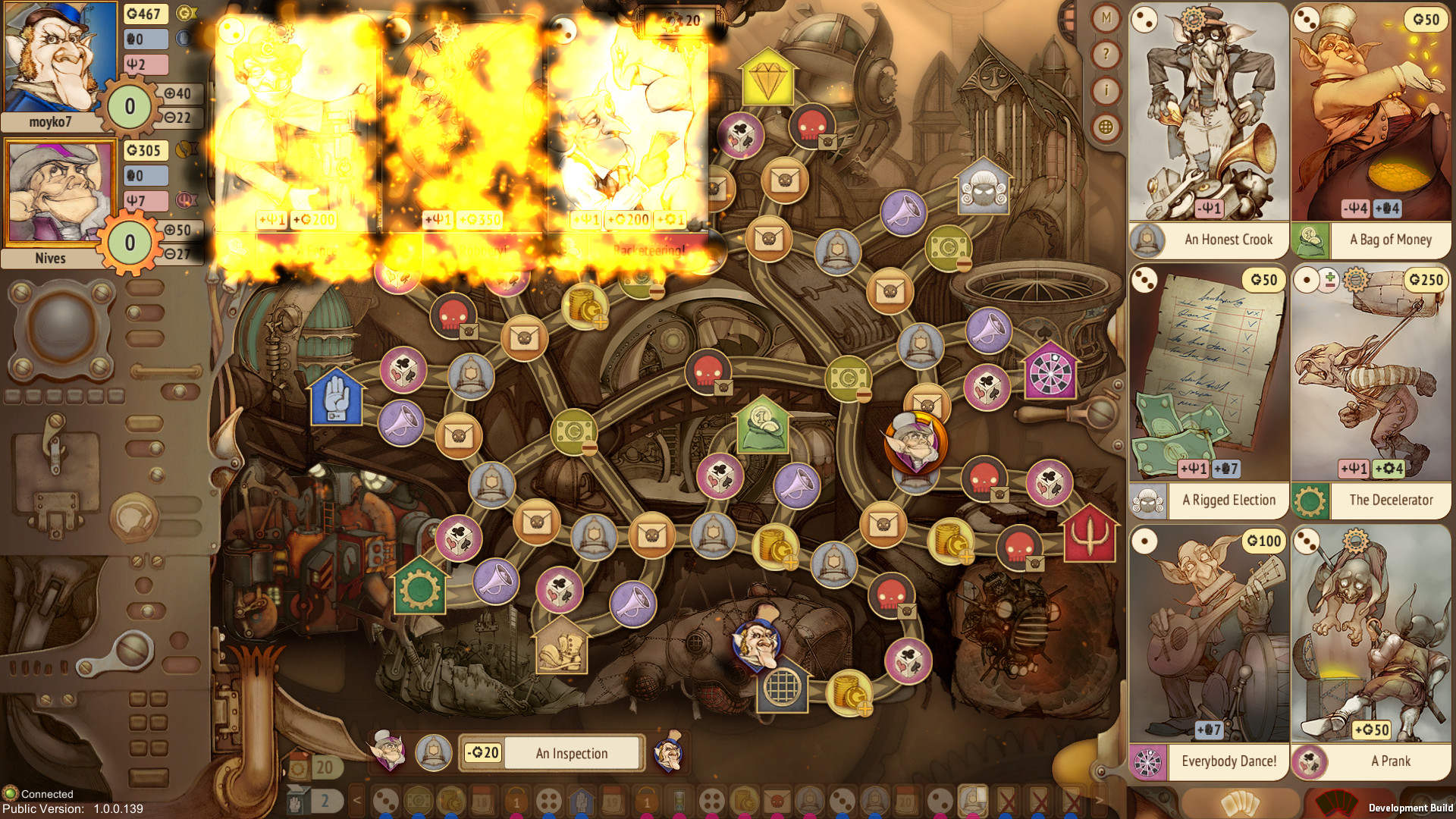 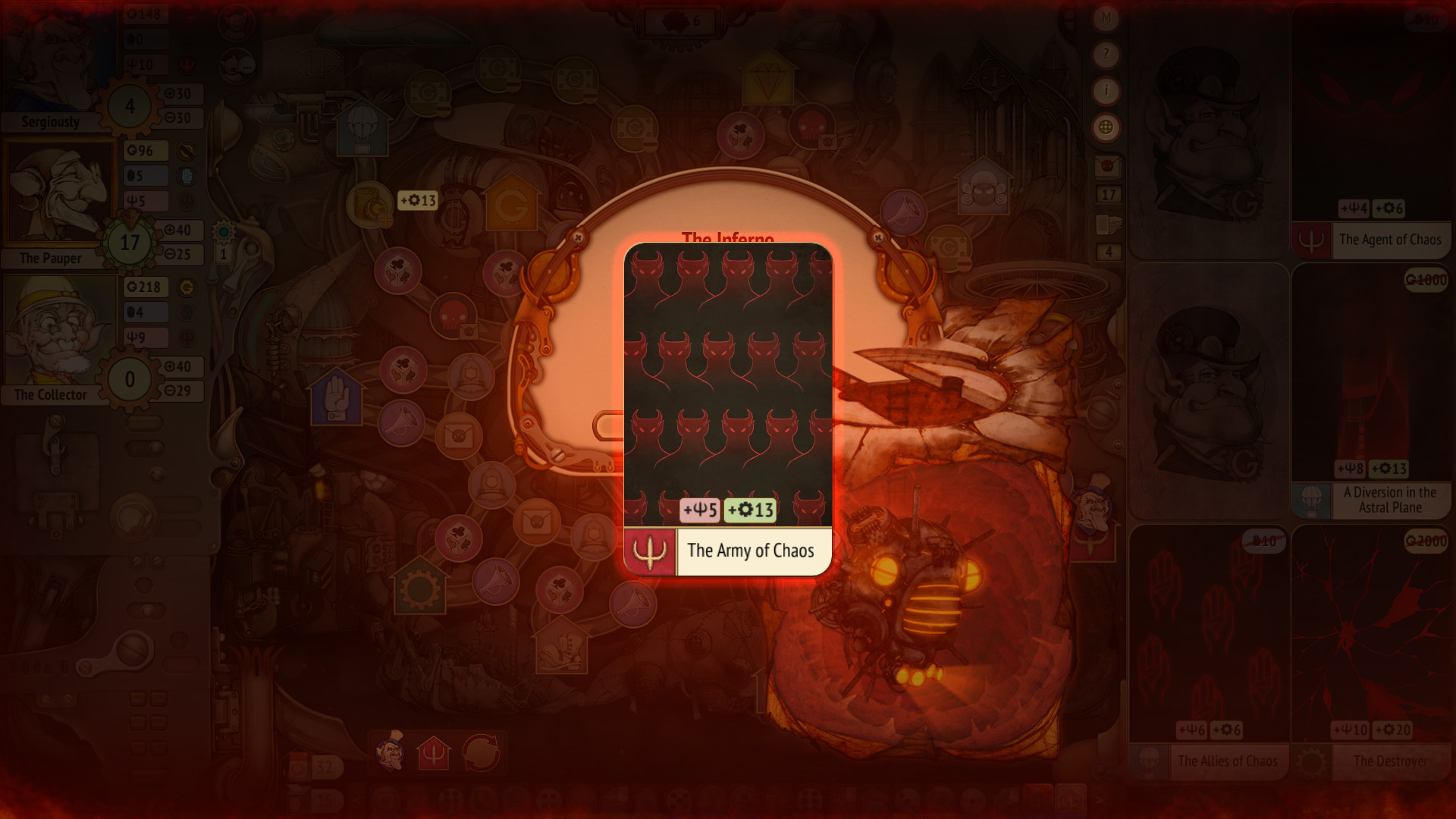 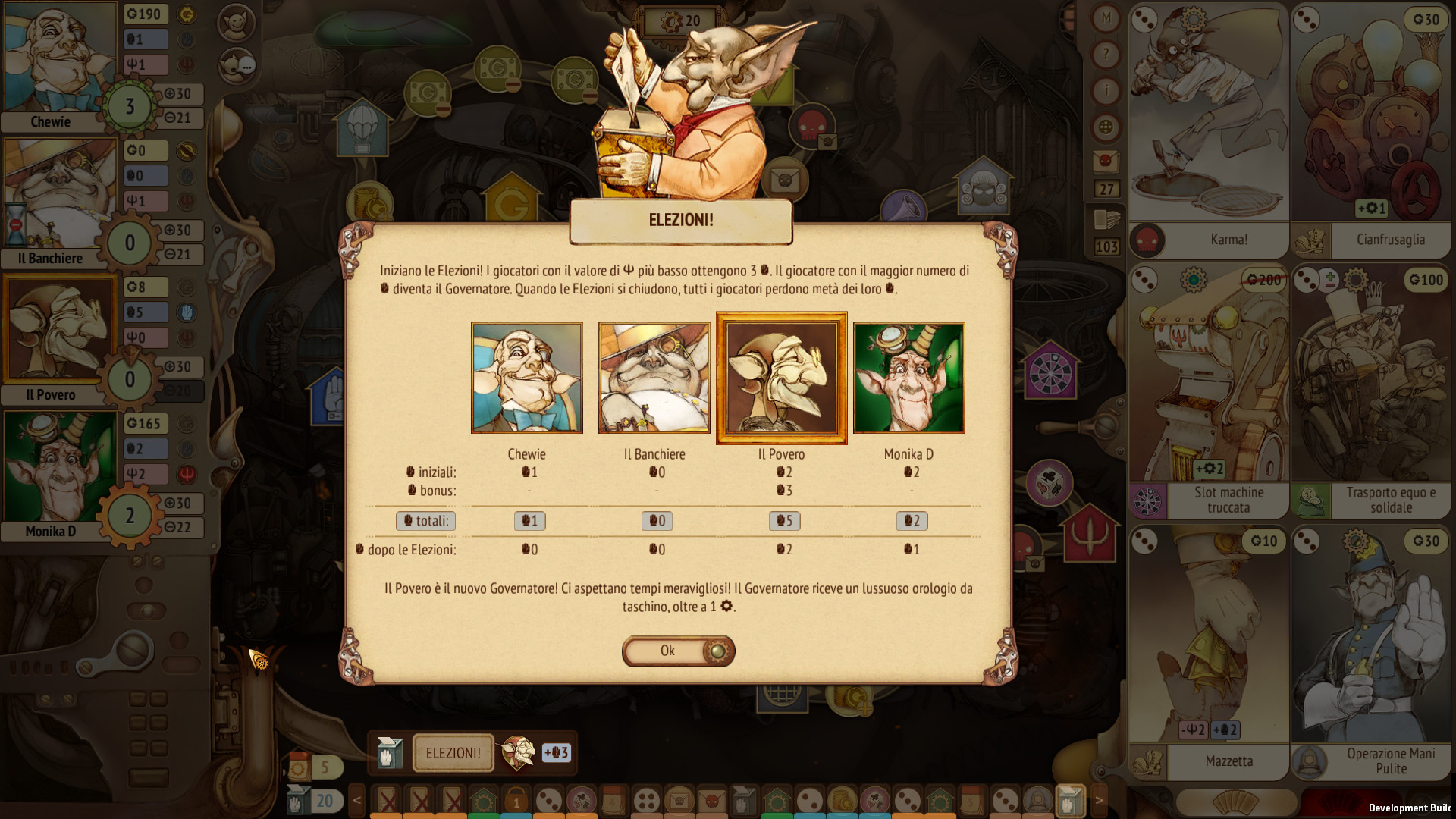 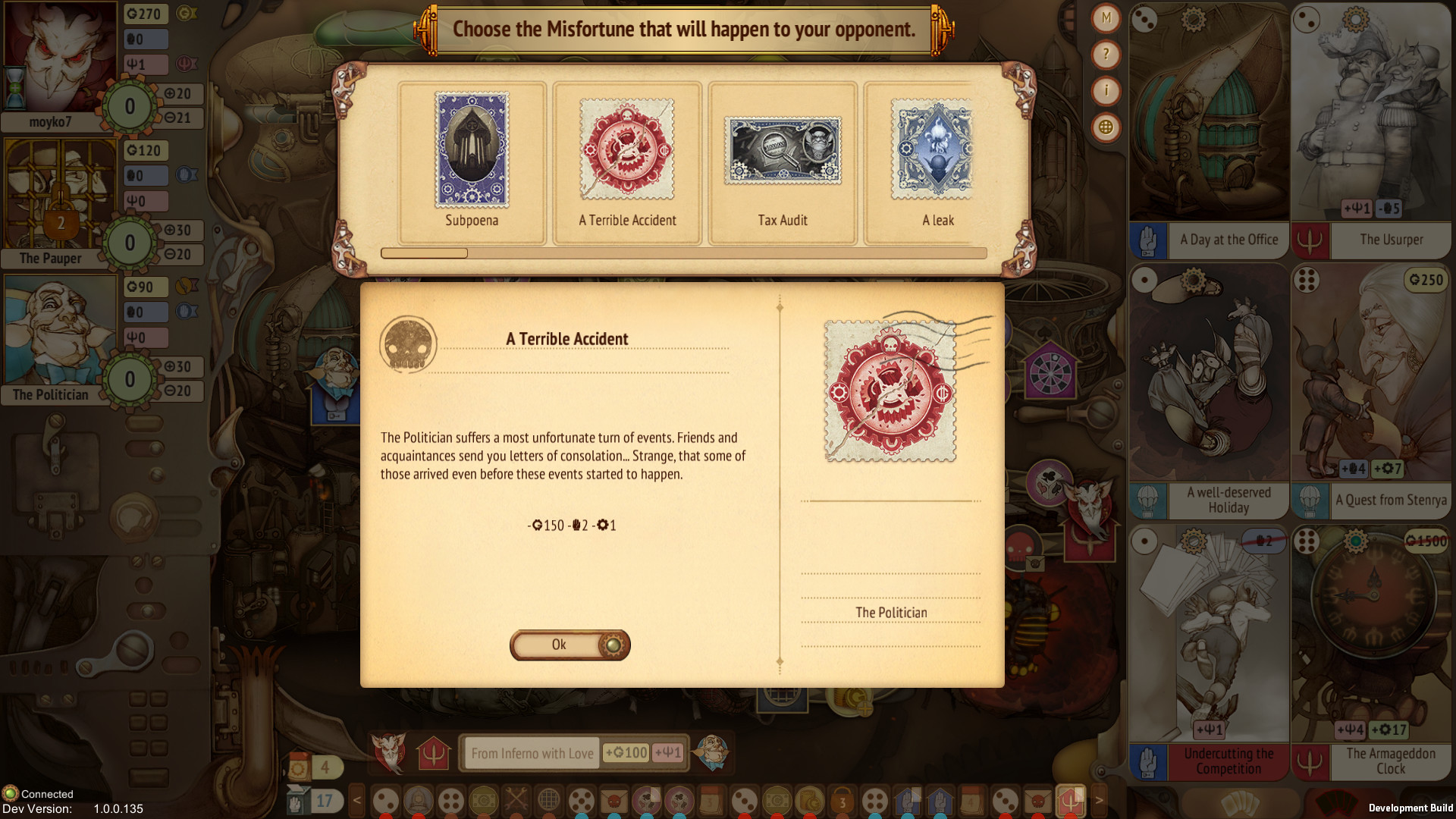 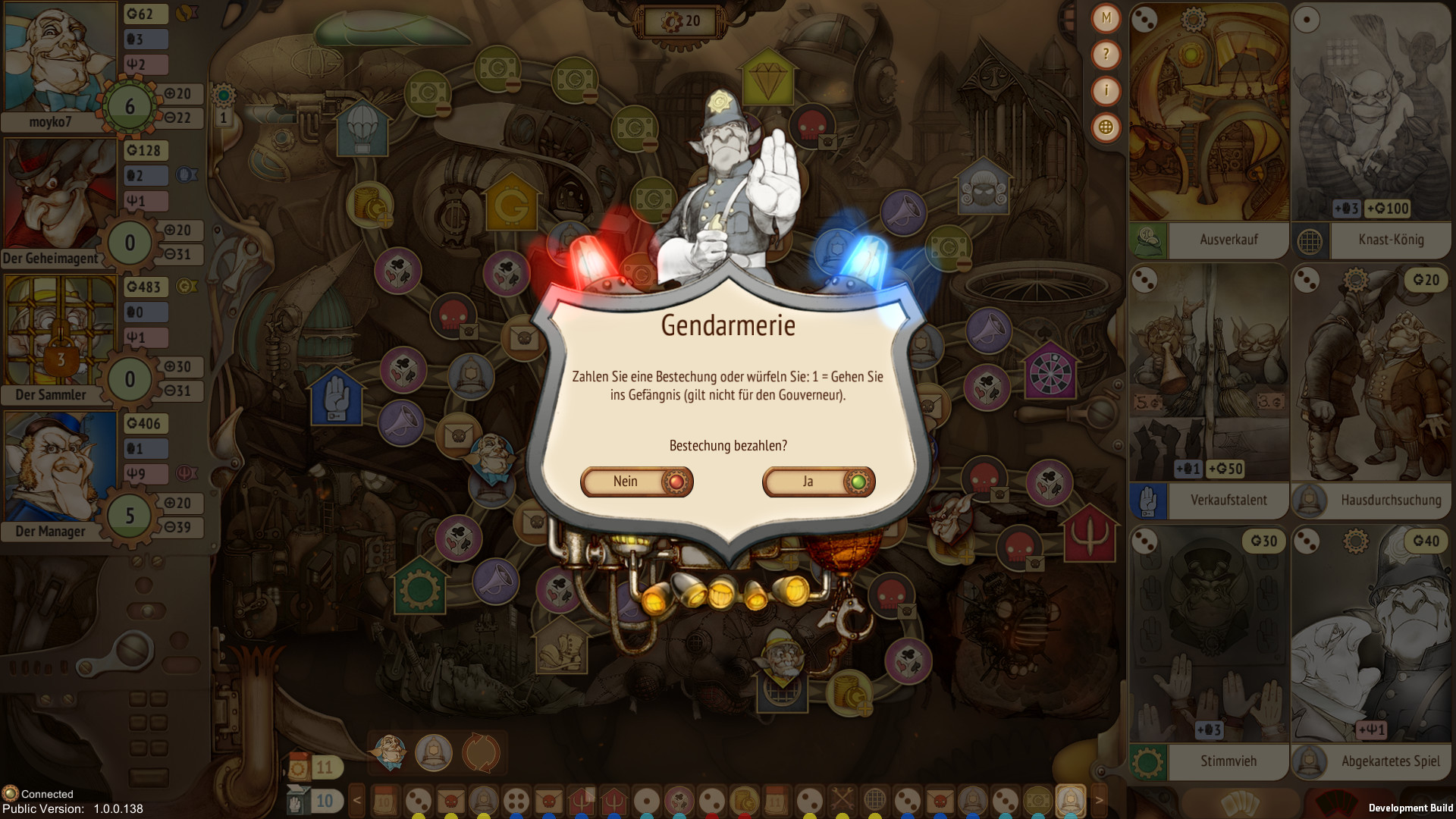 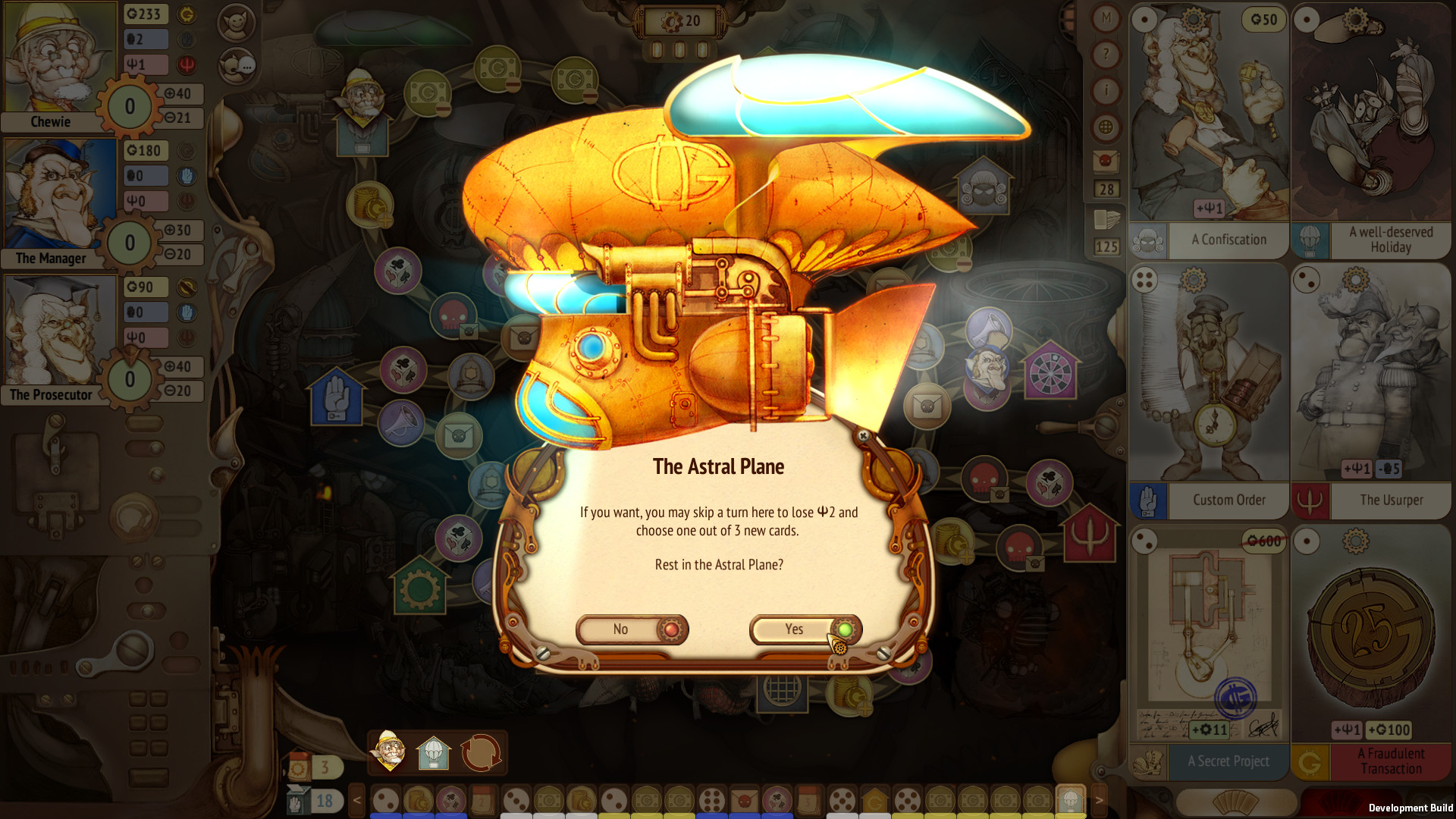 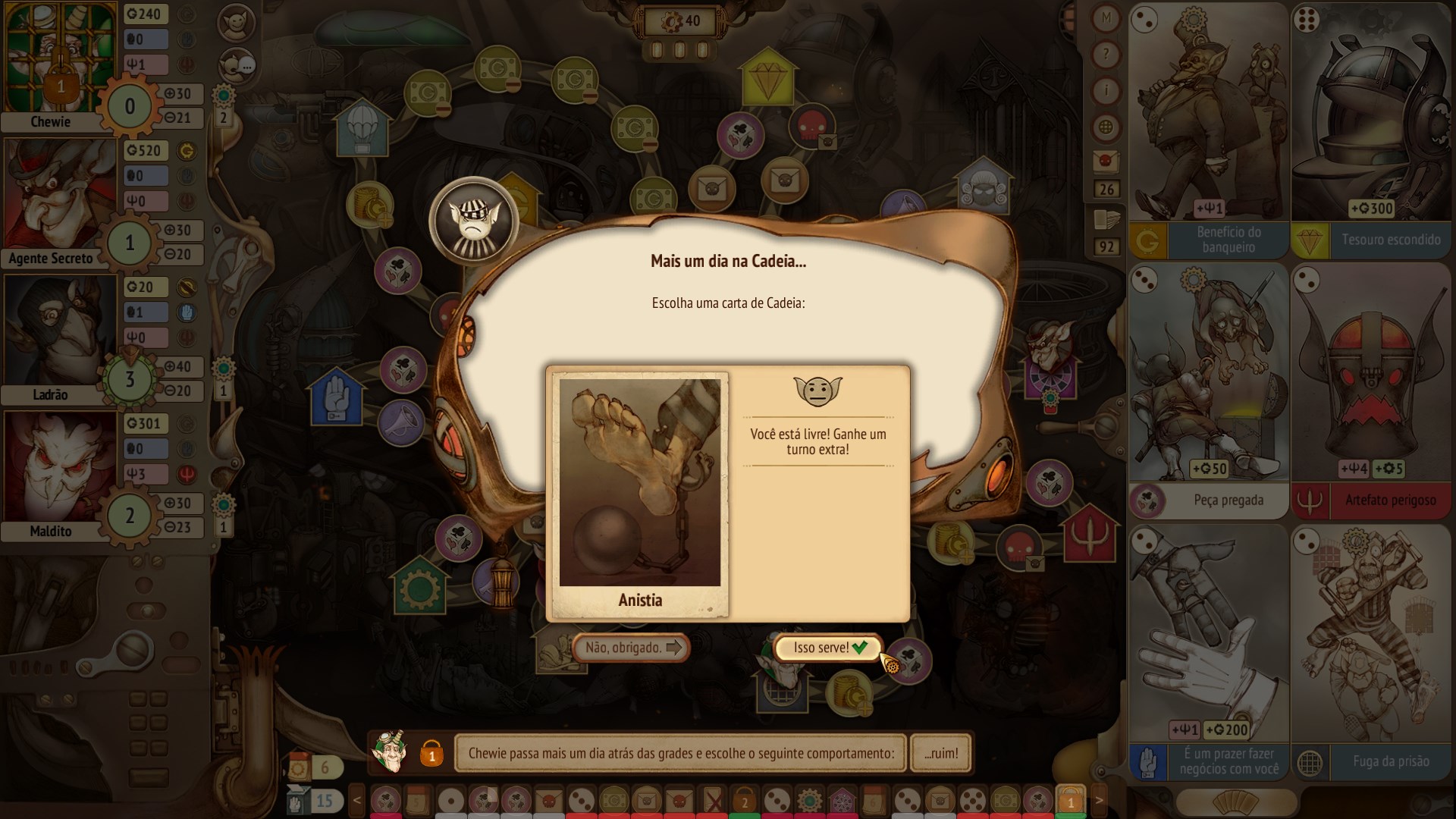 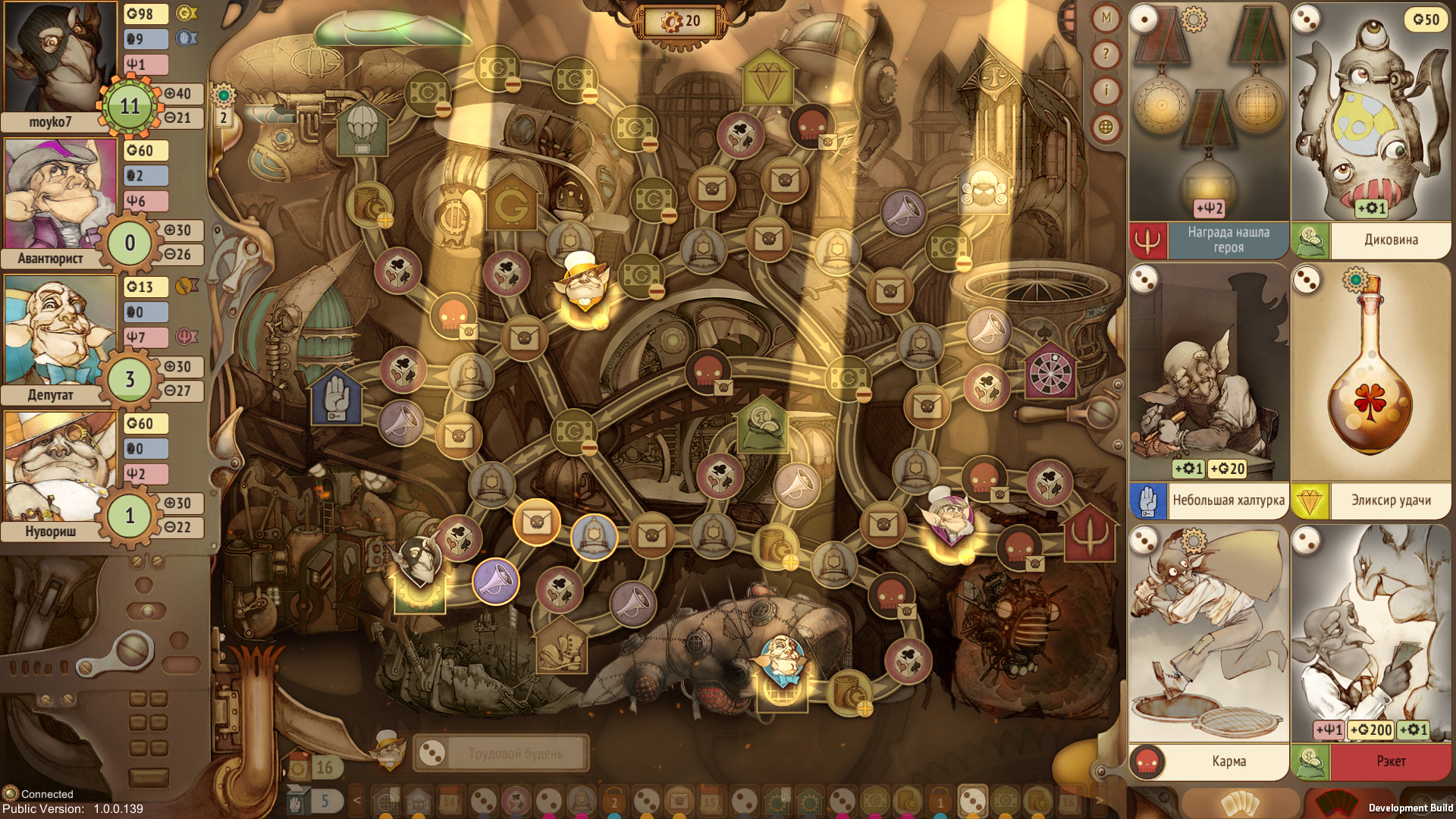 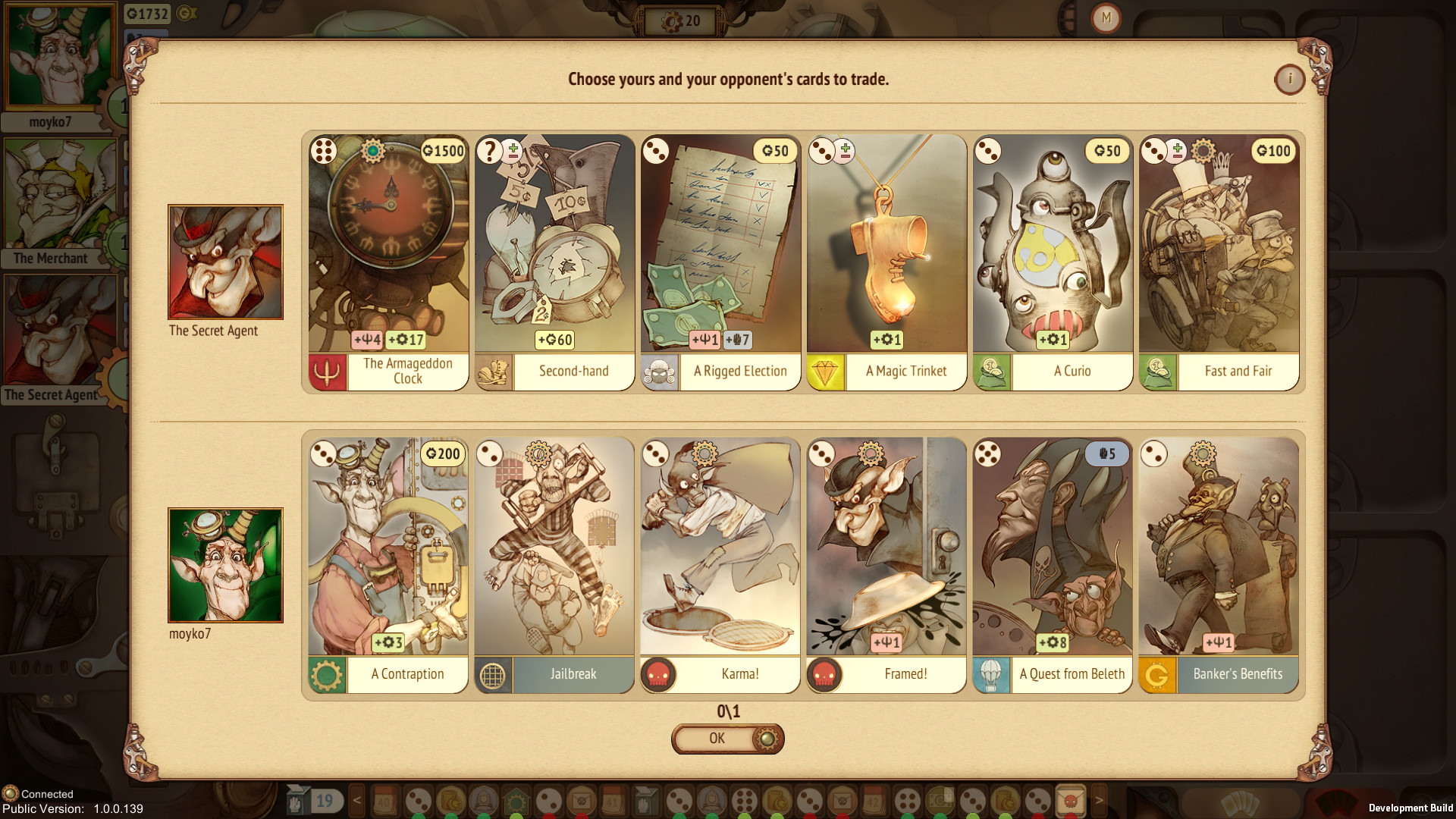 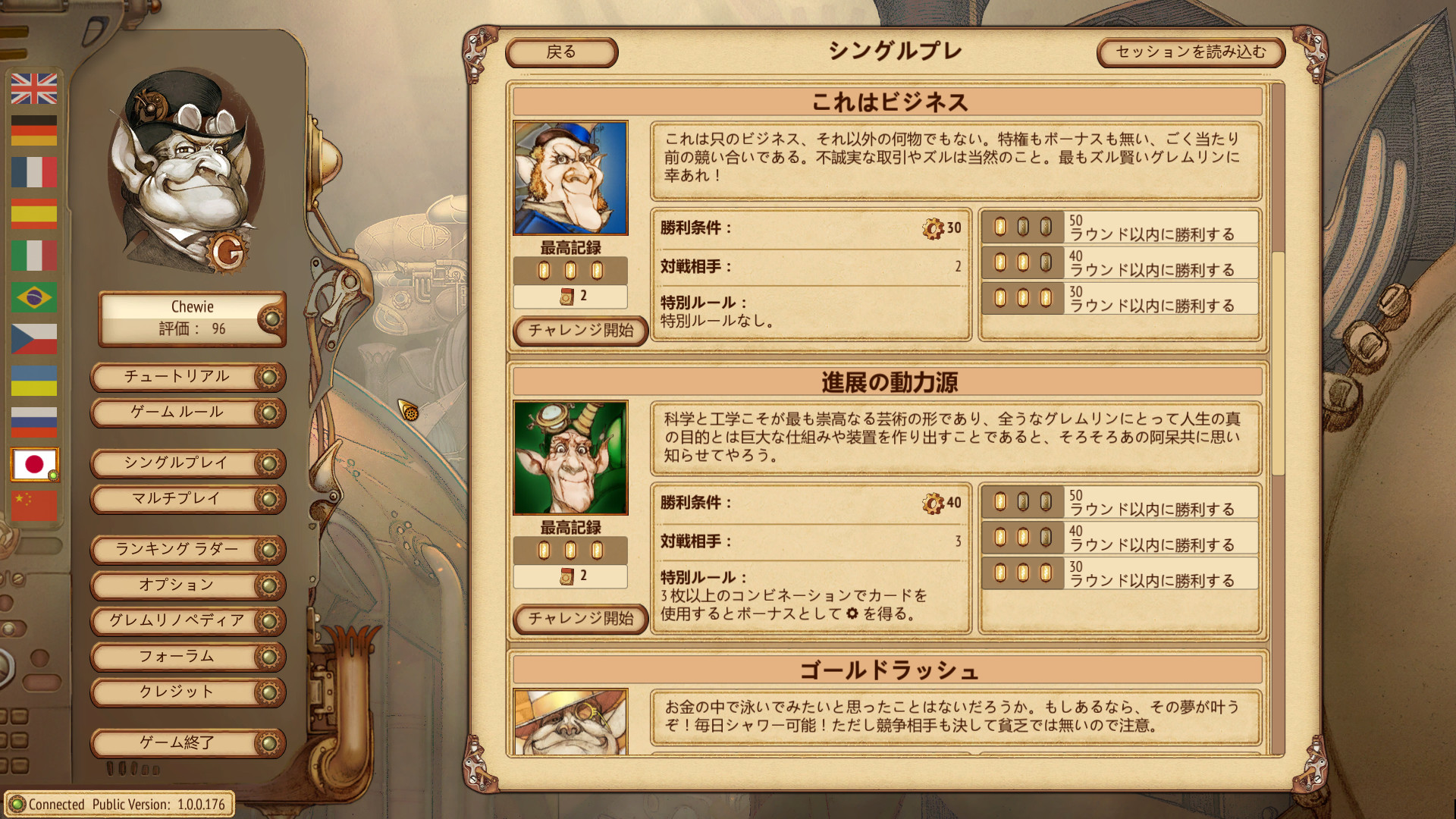 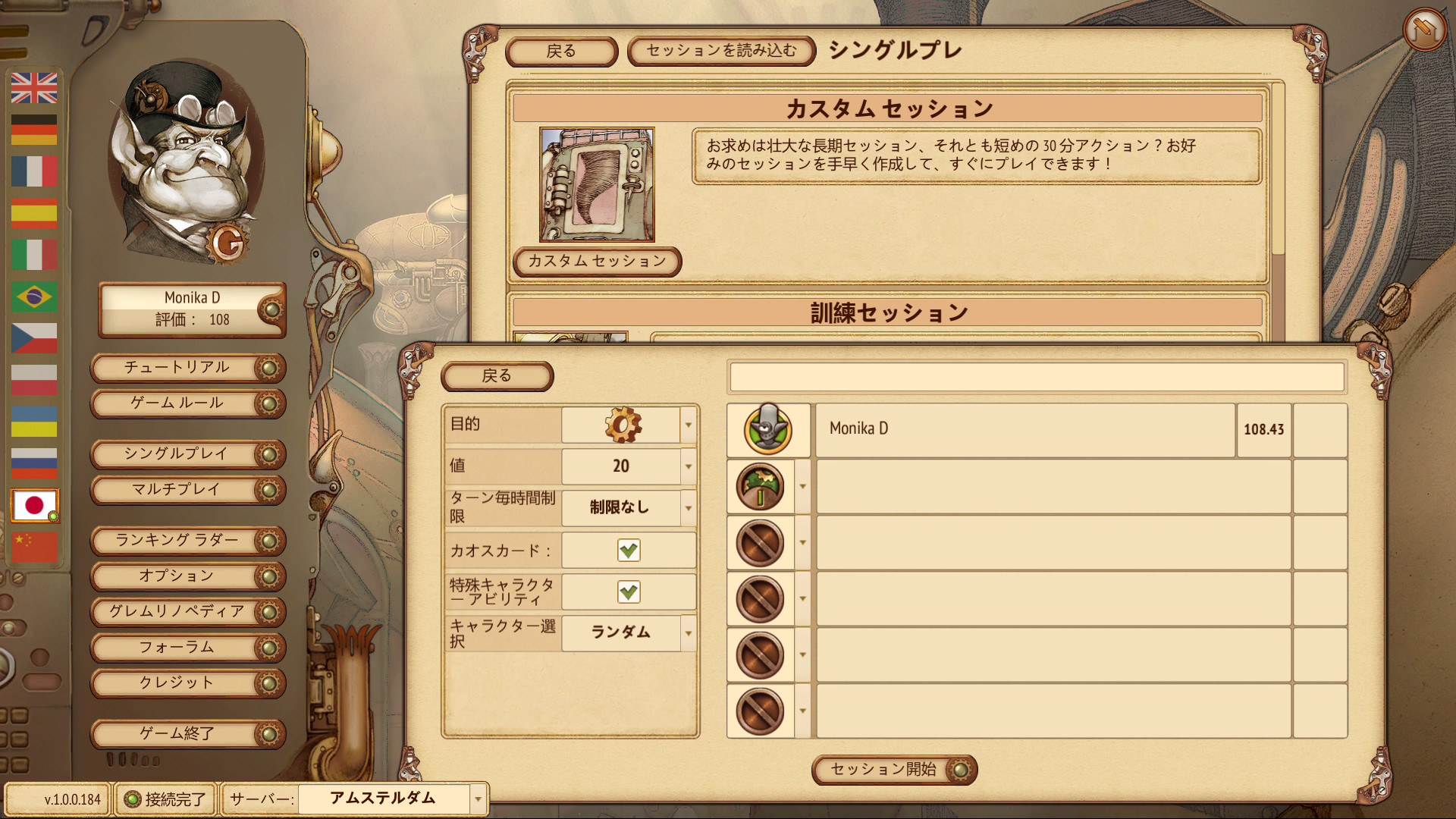 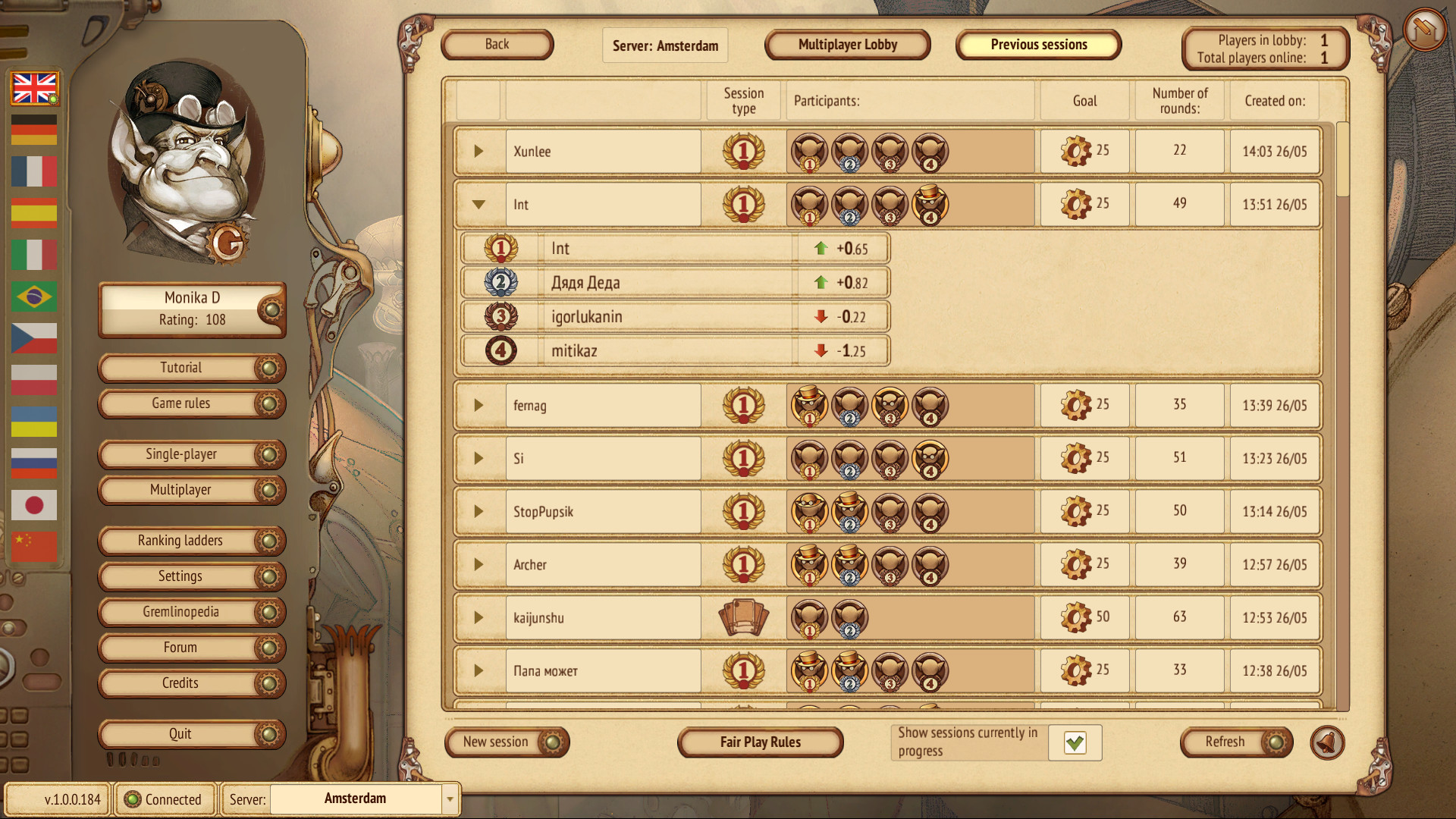 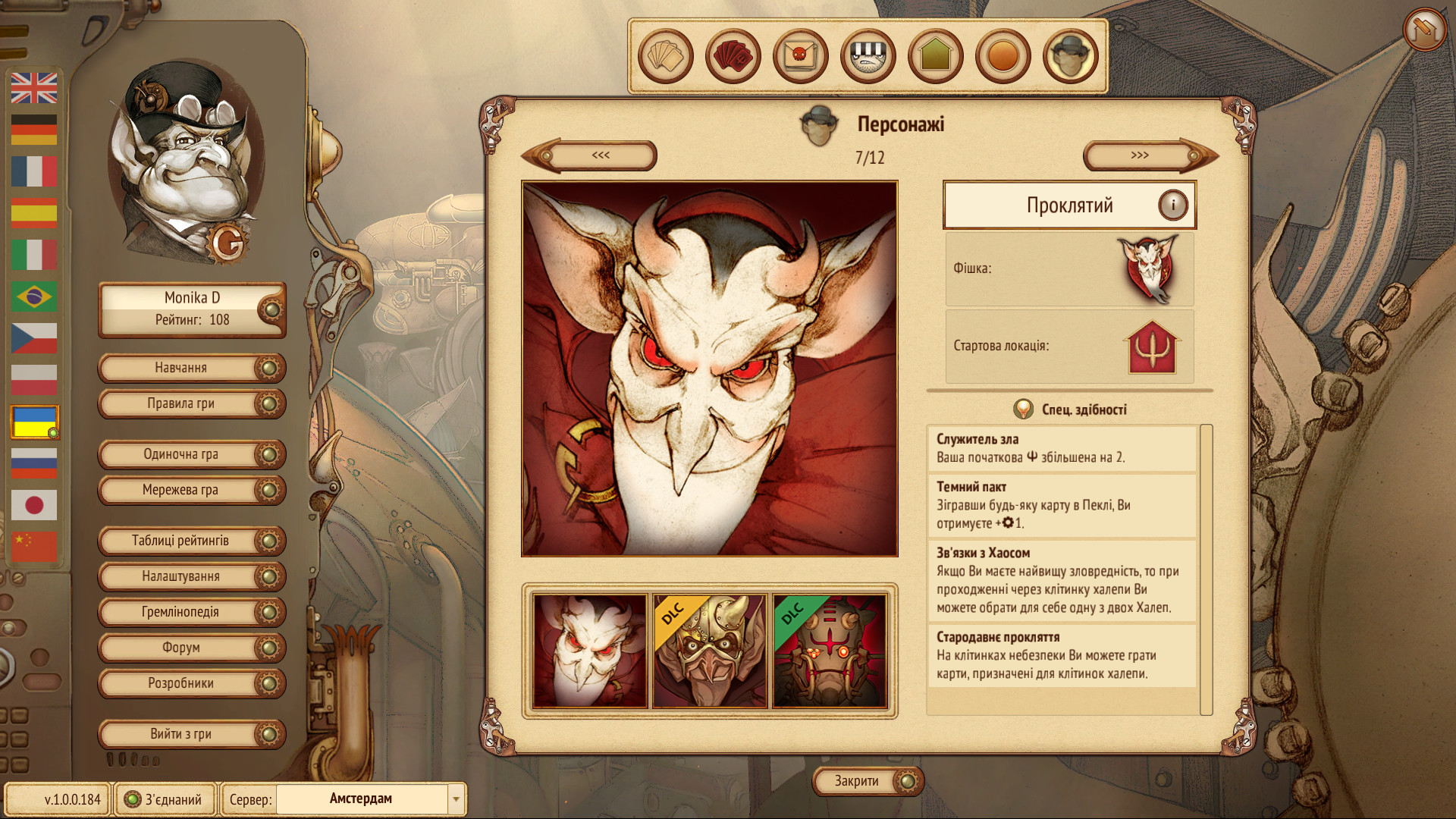 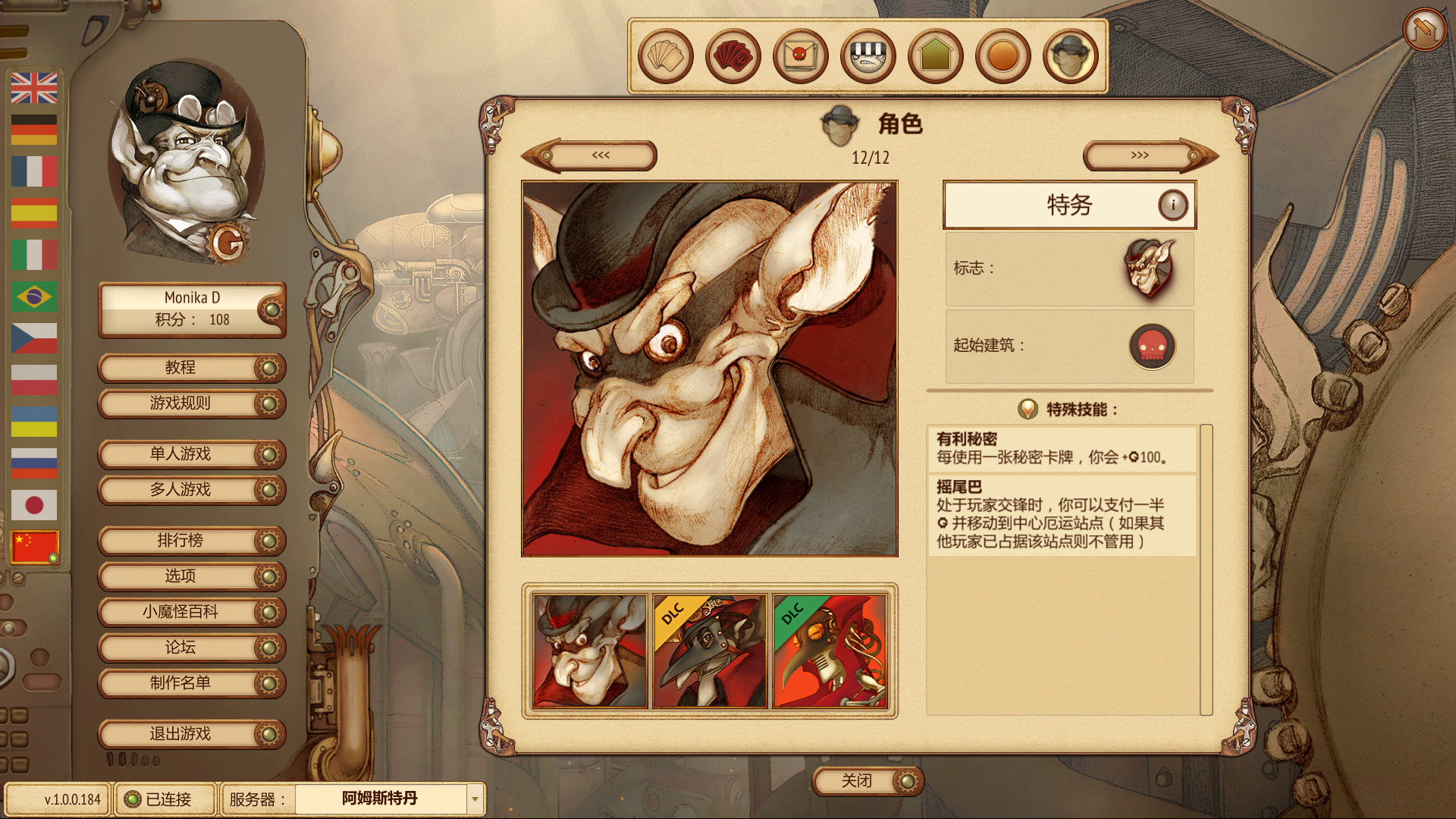 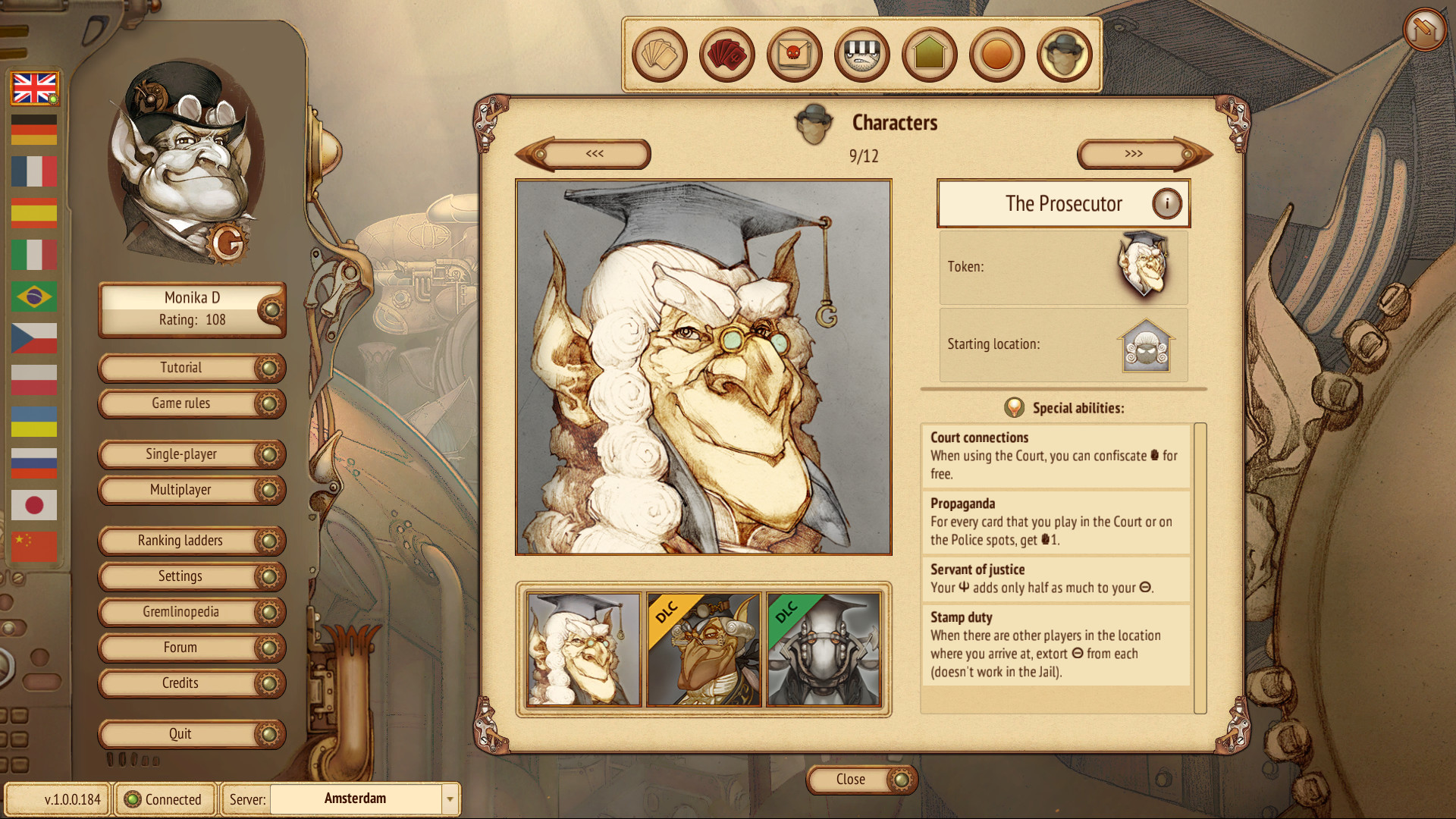 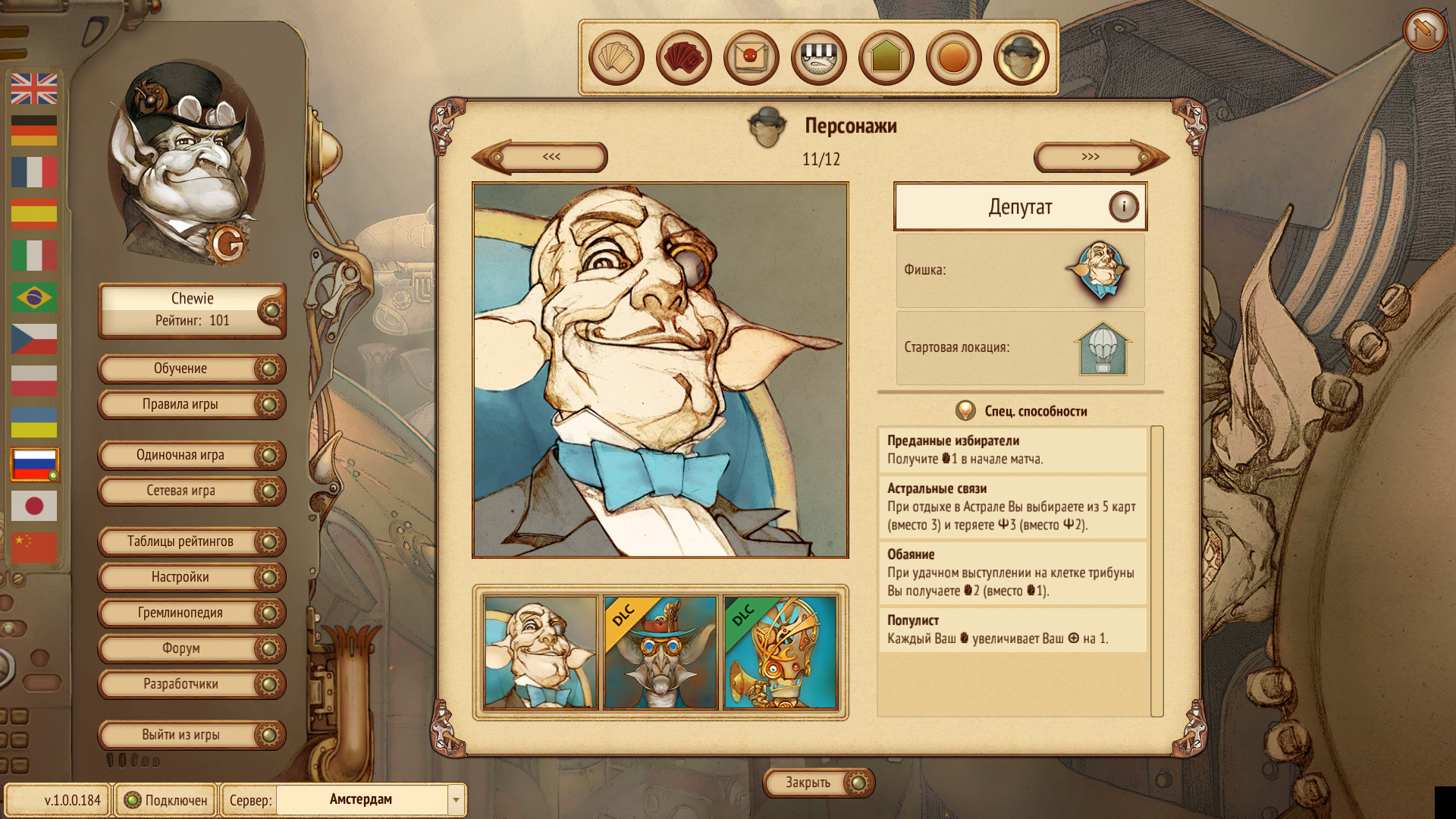 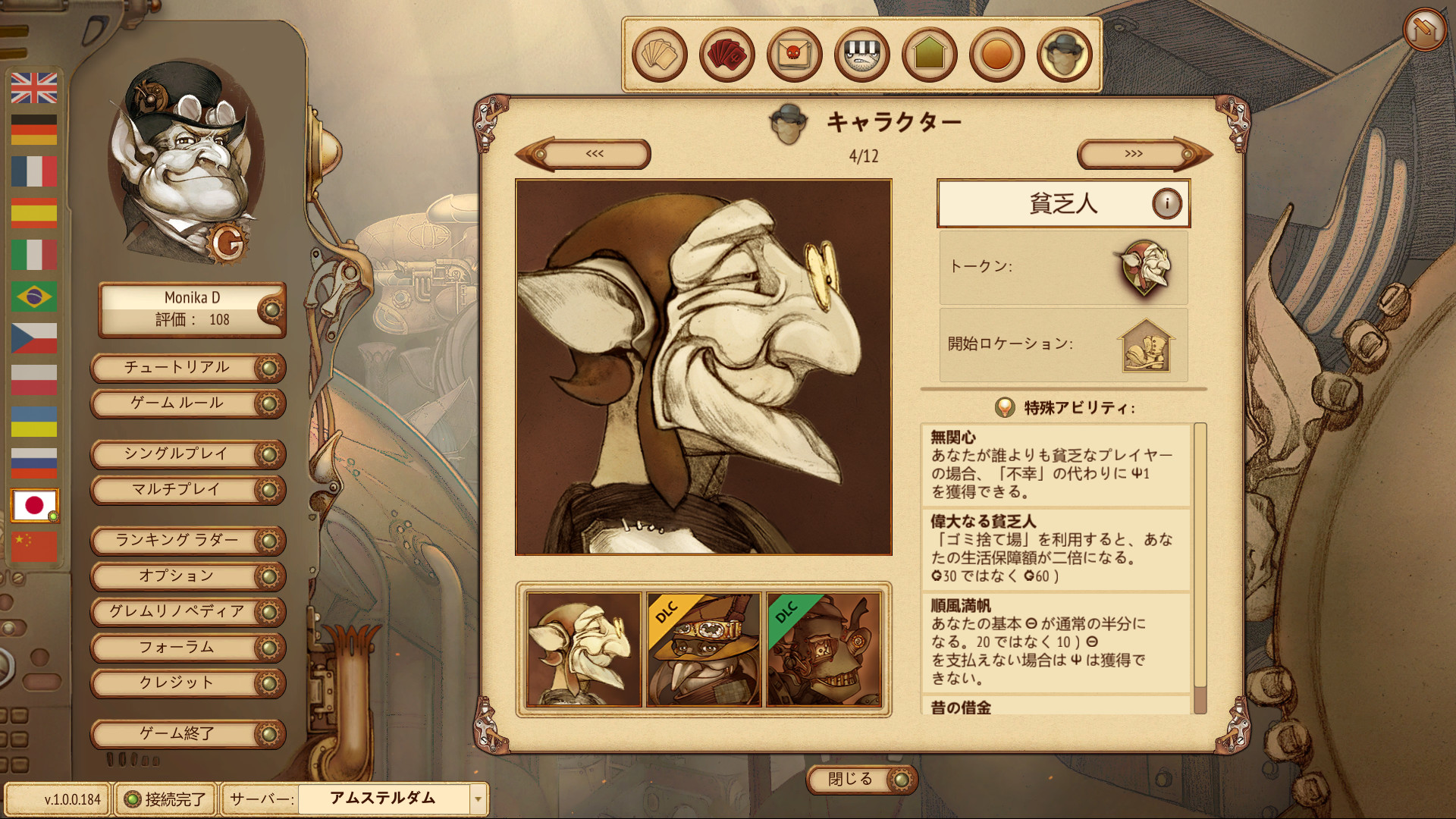 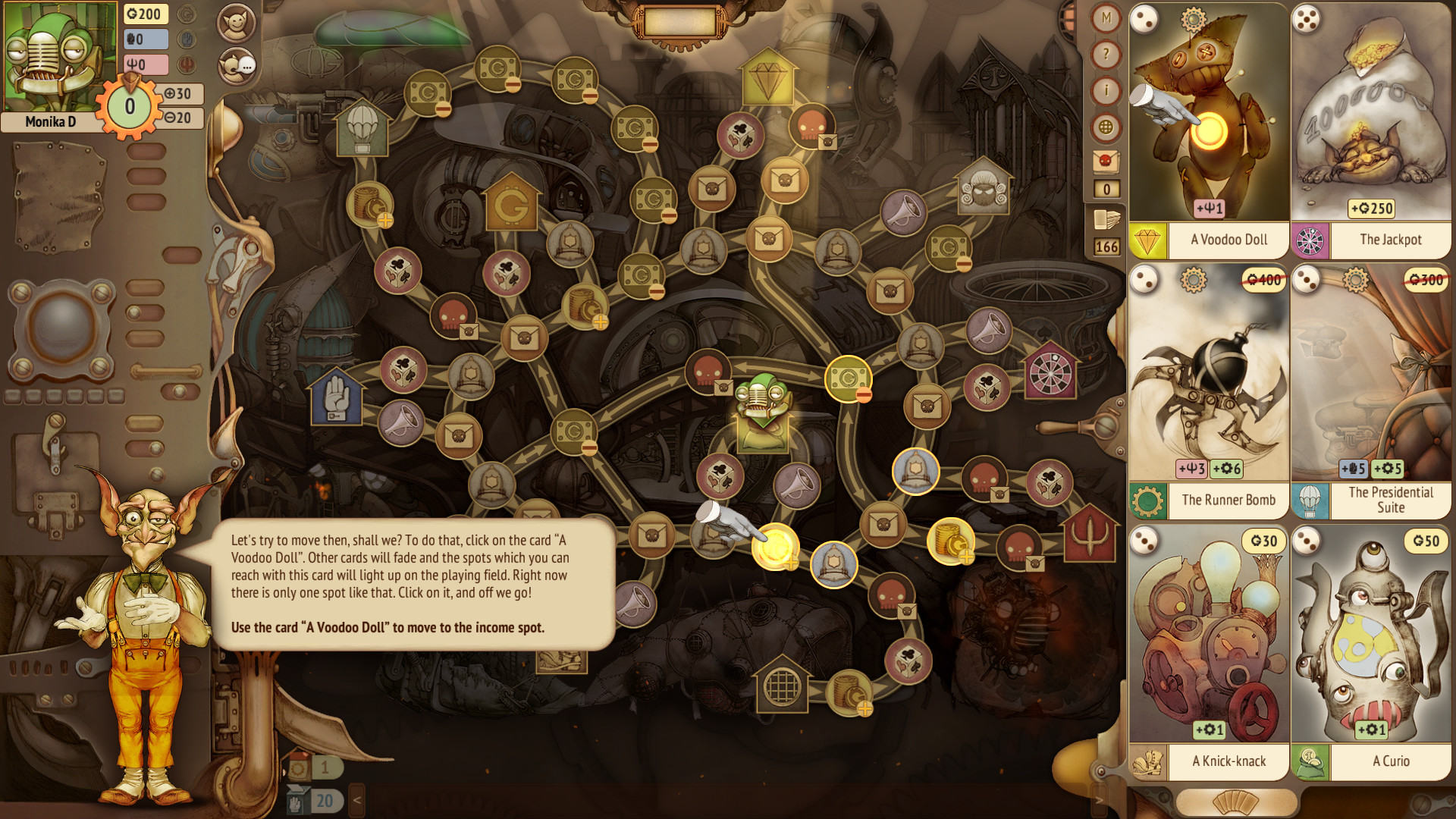 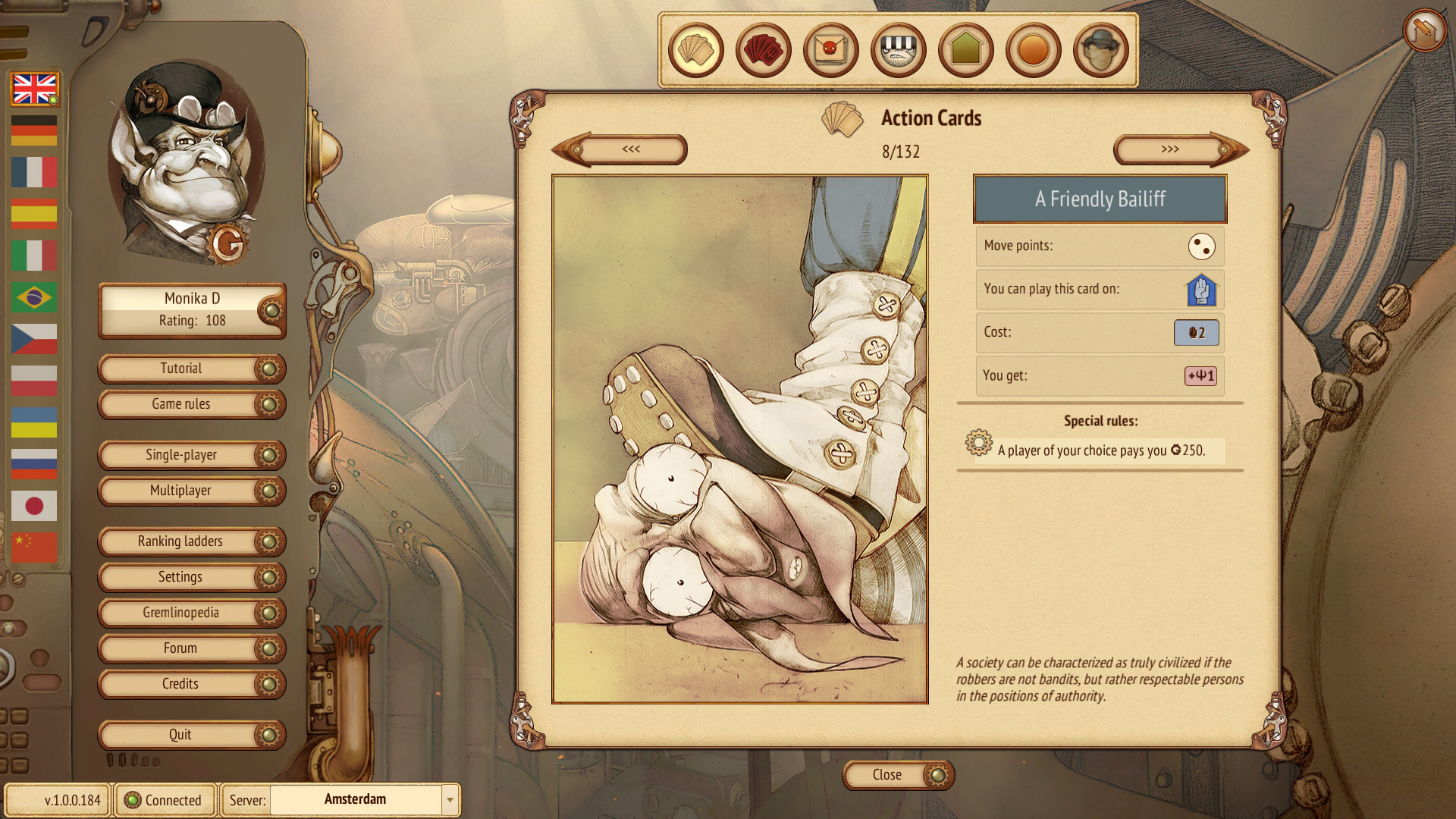 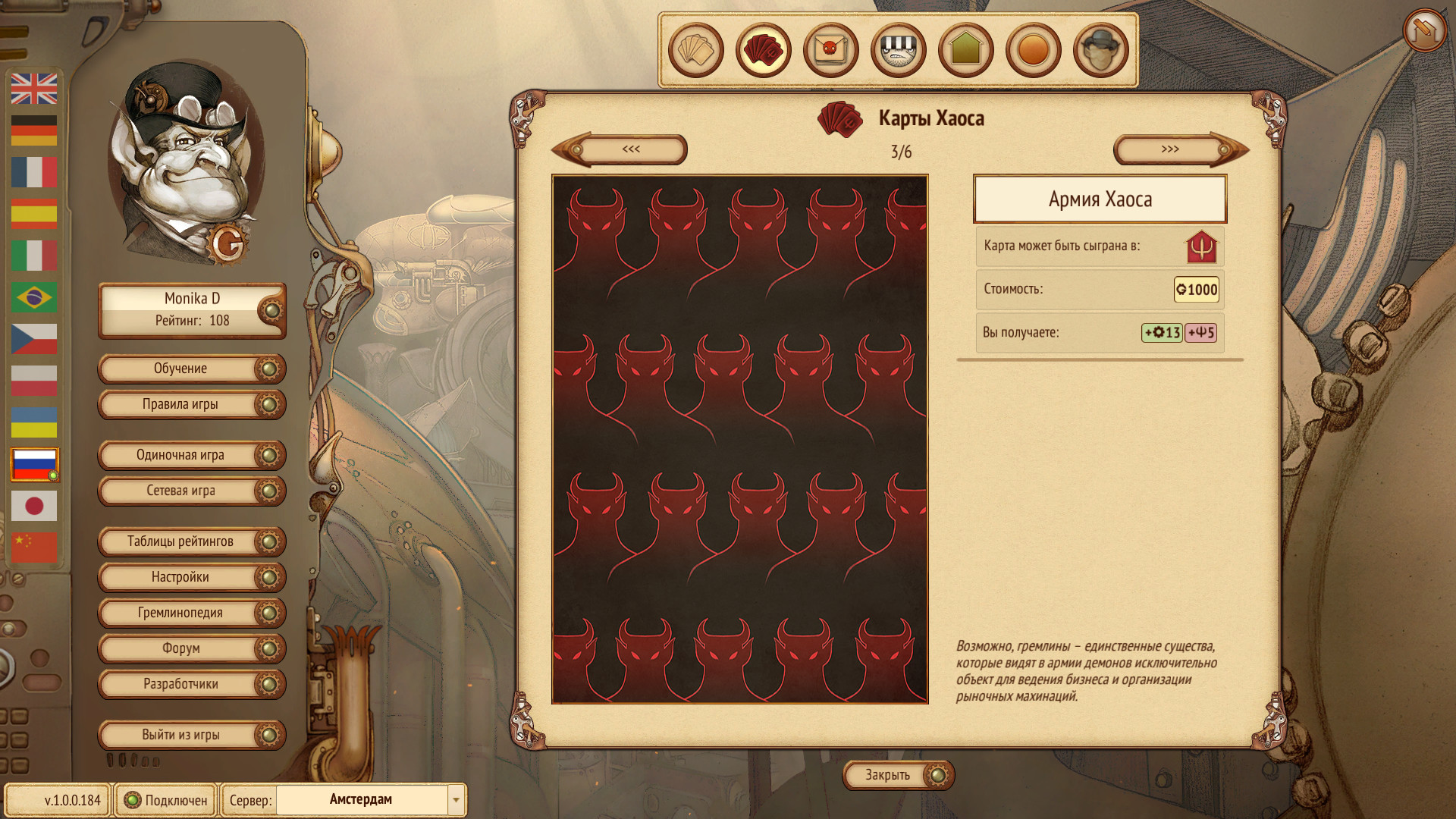 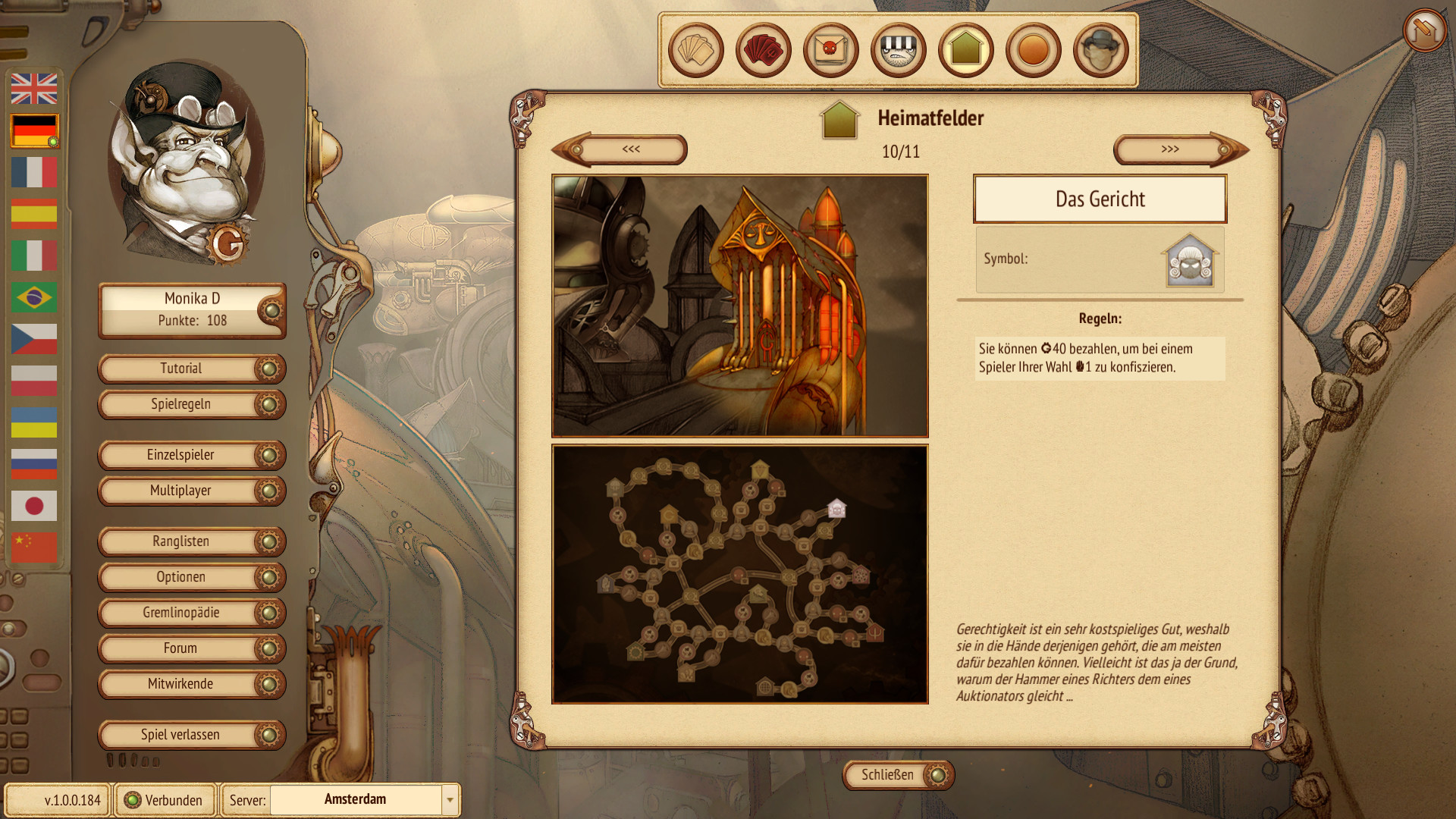 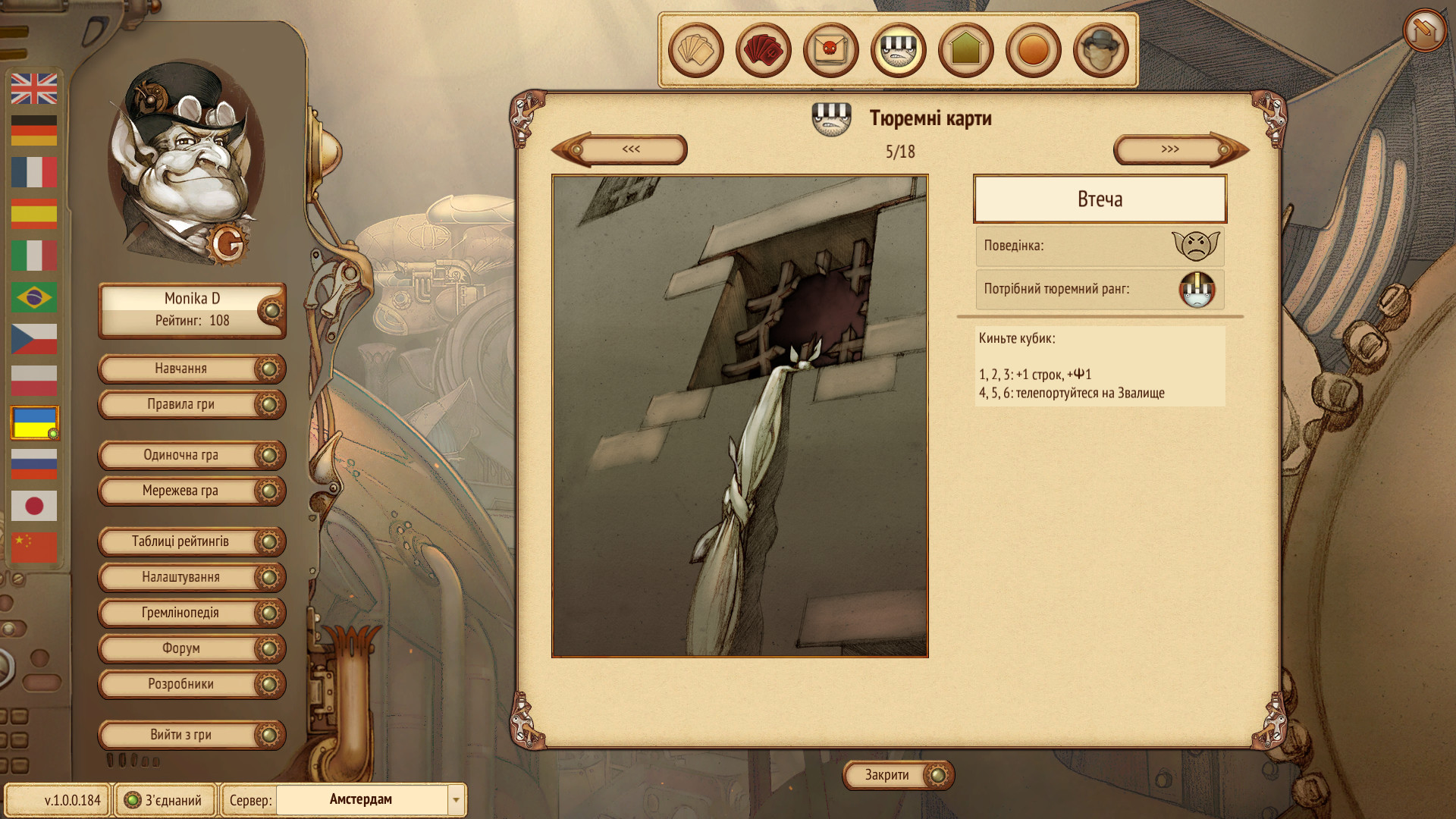 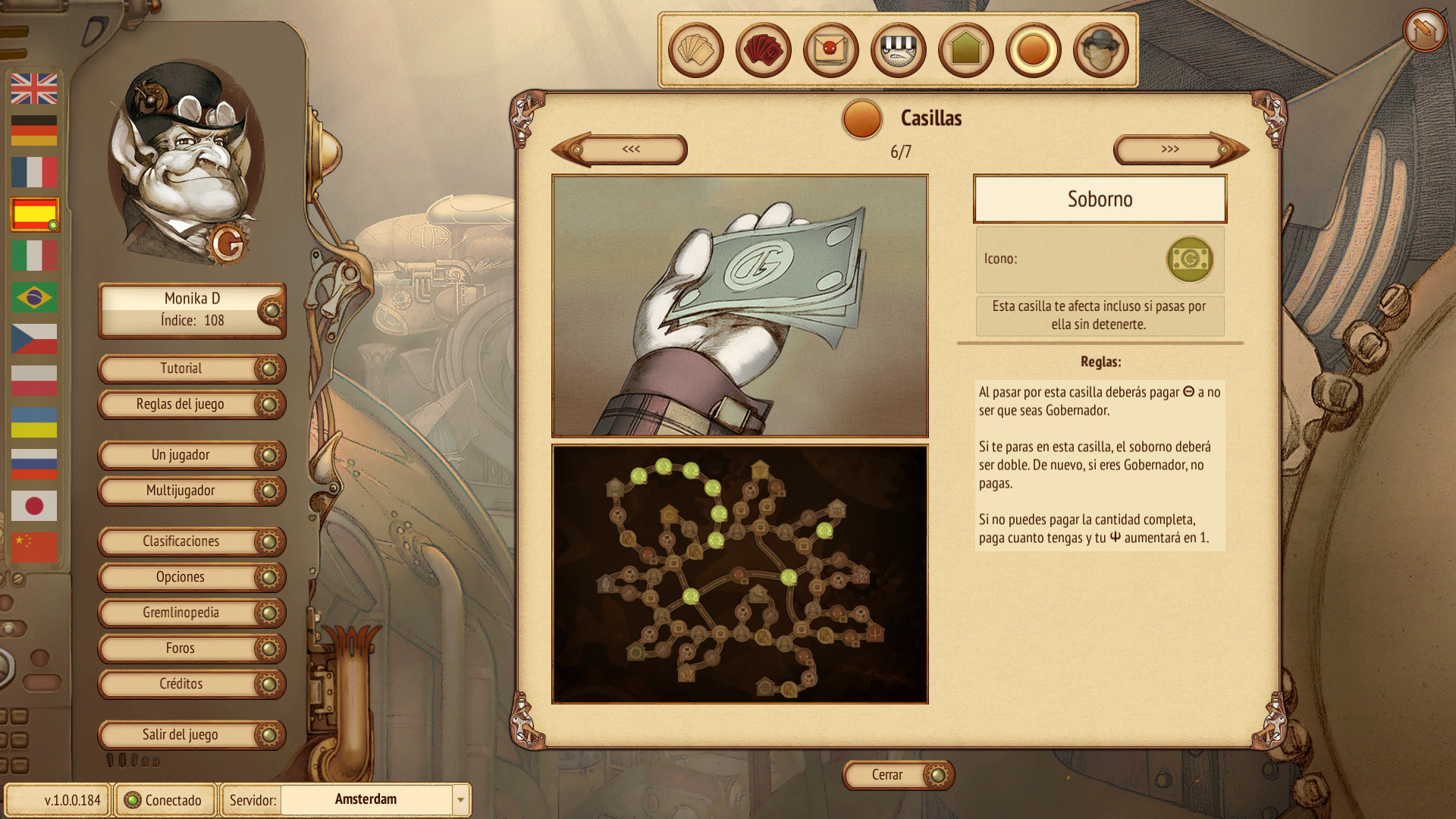 This is an intense strategy board game in a steampunk world of corrupt capitalist gremlins who compete for money, political power and prestige. Save and invest, steal and extort, arrest and get arrested – in single-player and multiplayer modes, with ranks and ladders. Unleash your inner gremlin!

HOW DO YOU PLAY THIS GAME?

Gremlins, Inc. is designed for 2 to 6 players, in multiplayer or in single-player mode (with AI bots). Each player has 6 cards on their hand (replenished from the same deck), and uses them to move around the playing field and to perform a number of different game actions. There is a lot of interaction with other players, and duels are significantly different from 3-player or 4-player games. You play for score limit, or rounds, or for time limit in custom or ranked sessions (with matchmaking by rating). Password-protected private sessions are also available.

HOW LONG DOES IT TAKE TO PLAY ONE SESSION?

The game offers different session settings to make them fit your available time, and single-player mode offers automatic Save/Load function at every turn so that you can take a break whenever you want (multiplayer mode offers re-connect functionality as long as the session is still in progress). A quick duel for 20 score points with a fast timer can finish in under 20 minutes, while a 4-player session for 60 rounds can last for 2 hours or more.

There are different types of cards in the game (permanent, regular, secret and criminal) and as each card can be used either

for action, you will develop both short-term and long-term strategies for making the most out of where you are, and what you have in your hand. Normally you spend half of your game time accumulating things, and another half controlling other players (stealing, arresting, making them pay a fine, initiating player conflicts, and so on). The more you play, the more new strategies you will discover, especially when combining the effects of several cards played in a row.

FINALLY, WHO ARE THE GREMLINS?

You think that’s just a pocket watch in your hand, a watch that’s a bit late because you keep forgetting to wind it up? No, no and no – you couldn’t be further from the truth! What you carry around is a whole gremlin town packed into this tiny mechanism: a town with its own bank, its own casino… and even its own jail! Gremlins are the microscopic creatures that inhabit any mechanism that they can possibly infiltrate. If a watch or a telescope malfunctions, then it’s probably due to gremlins who took up a residence there.

More than anything in life, gremlins value

prestige: prestige that one can claim after completing some sort of a grandiose engineering project. Aside from working on their own projects, gremlins mostly spend their time preventing other gremlins from building something even more grandiose. This they achieve through bribing officials and lying to the electorate, as well through stealing from their competitors - and outright arresting them.

A DISCLAIMER (JUST IN CASE)

We felt it important to note that Gremlins, Inc. is not a free-to-play game. Also, this is not a CCG or TCG: you do not need to buy boosters or packs, in every session the game offers the same deck to every player, and everyone's chances are equal.

We remain committed to the principle of continuously updating the game with new features (e.g. special character abilities) and new content (e.g. new cards, new Misfortunes) that come in the form of regular updates that are FREE for every owner of the product. At the same time, from time to time we create and release fun stuff (animations, character portraits, alternative music themes) that is not related to the game mechanics, as paid DLCs. If you like it, you can support our efforts by your purchase. However, there is absolutely no pressure to own any of the DLCs in order to play the game or compete in the tournaments.

Gremlins, Inc. was designed as a digital board game with the multiplayer mode at its heart. This is not to say that we don't like single-player – we do, and there's a separate section with the single-player challenges as well as the mode where you can create any custom single-player session that you like. However, the architecture of the game is built in a way that allows us to continually update the game mechanics and AI logic, which for this reason is processed entirely on the server side. Therefore whether you play Gremlins, Inc. in a single-player mode or in a multiplayer mode, your game client needs to be connected to Steam, and game's server, at all times. If you are looking specifically for a game that can be played offline, then Gremlins, Inc. in the current state is not the right product for you. An offline-only version of the game is currently in development for release later in 2016.

The game currently supports 2 separate servers: Amsterdam and Singapore. Players are able to check their ping value for each of these servers, and play on the server that is the most convenient. Each server has its own player ladder, statistics and player profiles. Most players choose Amsterdam, since ping to Amsterdam from anywhere in the world rarely exceeds 300. However, as we saw more and more players from the Asian region join the game, especially from China, we added the server in Singapore in order to be able to offer faster connection specifically to these players. We hope that this works well for every player, as good player experience is our top priority. We will continue to monitor the quality of our server/client connection in order to adapt the servers to the changing requirements and we thank you for your patience.